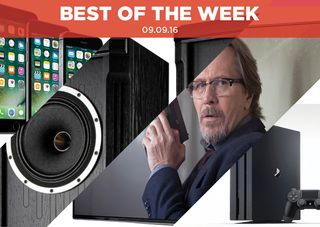 This week the worst kept secret finally emerged as Apple announced the iPhone 7 without a 3.5mm jack.

Tannoy's new owners confirmed that manufacturing of its high-end loudspeakers will remain in Scotland, Sony's PS4 Pro '4K' console is set for a November release and Bowers & Wilkins has updated its P3 headphones with the P3 Series 2.

And we began our countdown of the top 40 hi-fi and home cinema of all time...

Apple has announced the iPhone 7 and it no longer has a proprietary headphone jack. Instead it will be bundled with new Lightning connector EarPods and a 3.5mm adaptor.

Music Group – the new owners of Tannoy – has confirmed that production of the Prestige range and other high-end loudspeakers will remain in Scotland.

Rumours had persisted that Music Group, which has a manufacturing plant in Zhongshan, China, would move there; instead the company will relocate to a new site in Scotland.

Sony's PS4 Pro is a 4K HDR PlayStation, sort of

Sony's latest console jumps into the 4K arena with a few caveats and omissions. It won't play games in native 4K, nor does it have a UHD Blu-ray drive. It will upscale games to 4K and be able to handle HDR too.

A new Netflix app will be available at the console's launch, which is scheduled for 10th November.

Bowers & Wilkins is upgrading the P3 headphones with the P3 Series 2. It features a new driver which aims to improve 'overall sonic accuracy' and comes with two micrphone cables, one that's compatible with iPhones and another for 'all mobile phones'.

Technics explains what's so good about the SL-1200G turntable

Did Sony just kill 4K Blu-ray with the PS4 Pro?

How about a 24k solid gold music system for £4 million?

Dali's love affair with the letter K continues with the Katch wireless speaker, and it's one of the year's best. The sound is a powerful and full-bodied, with a great sense of timing and dynamics.

It fares well against its competitors and its performance makes it a contender for a What Hi-Fi? Award later this year.

Bose should be cautiously looking over its shoulder, as Sennheiser's wireless noise-cancelling headphones are more than a match for Bose's equivalent. Highlights include a clear, dynamic sound that's rhythmically more surefooted than its nearest competitor.

With effective noise-cancellation and an attractive price, this warrants an audition.

Another Samsung TV, another five stars. The manufacturer's rich vein of form continues with an effort that offers stunning quality across all sources, great HDR performance and an immersive picture.

If you're still holding off buying a 4K set, this might tempt you to jump on board.