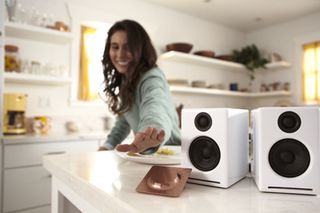 If you like the notion of using a wi-fi network and your existing system to "stream music to every room in your home", a new device has been unveiled by a pair of former Googlers that may be of interest to you.

Daniel Conrad and Shawn Lewis are the people behind Beep, the streaming system they say is compatible with virtually any system via its auxiliary input. It will be available initially in the US only from autumn 2014.

Beep is already being regarded as the audio equivalent of Google's Chromecast by making your existing system wireless. It looks set to find itself going up against Sonos in the multi-room market too.

What exactly is Beep then? It's a small copper dial that plugs into a powered speaker system – as long as it has a 3.5mm auxiliary, RCA or optical input. You will, however, need one Beep plugged into each system.

Beep says that using wi-fi connectivity rather than Bluetooth ensures a greater range and doesn't need to you "pair up" devices – you just connect it to the wi-fi network and you're ready to go.

Once the device is plugged into your sound system, playback is controlled using a free Beep app for iOS and Android devices. You'll be able to play your music library, or stream directly from the internet.

MORE: Onkyo to take on Sonos with Imagination Technologies collaboration

Pandora has already been integrated into Beep, and the expectation is that other services – such as Spotify, Rdio and more – will follow at a later date.

Daniel Conrad says: "We built Beep to let families and friends listen together again, and to make their time together better by bringing music back into the home.

"Our technology and partnerships let speaker manufacturers connect directly with music providers to offer one seamless, multi-room listening experience, no matter how their speakers are designed."

Beep is due to start shipping in autumn 2014 at a retail price of $149, with a limited number to be available for pre-order at $99. However, Beep is only available to customers in the US at present.