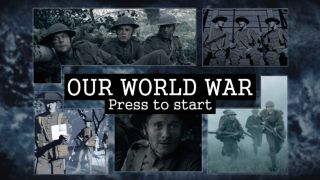 The episode will form part of Our World War, which is inspired by BAFTA award-winning series Our War and is designed to tell the real stories of British troops who served on the Western Front during the First World War in 1916.

From 9pm tonight [August 14th], you'll be able to visit www.bbc.co.uk/ourworldwar using your tablet or computer to take part in the special interactive episode, which puts you in control of the character Corporal Arthur Foulkes.

With the combination of "broadcast quality drama and animation", you'll take decisions on behalf of Corporal Foulkes using on-screen buttons to continue the story – based on real life accounts taken from the Somme in 1916.

The episode will be split into three parts and, at the end of each part, you'll receive feedback on the decisions and progress you made – including a breakdown of your choices and how they compare with those of real soldiers.

BBC iWonder executive editor Chris Sizemore said: "We commissioned this interactive episode because we saw a unique opportunity to reach younger audiences with an innovation that turns viewers into participants."