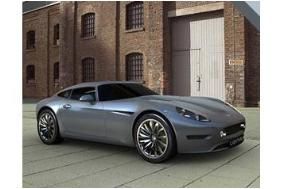 B&W (Jaguar), Naim (Bentley), Bang & Olufsen (Audi, Aston Martin), Dynaudio (Volkswagen, Volvo) and Bose (Ferrari and more) amongst others, have all put some serious time and money in to developing proper hi-fi systems for cars.

Now it's the turn of AVID. Having started life making top-notch turntables, AVID has expanded over the years in to other fields, which now includes an in-car system. The partnership has been struck with local, to AVID, company, Lightning Car, makers of the first electric sports car.

Combining classic British sports car design and a power source that's virtually free of polluting emissions, the Lightning now has an AVID music system – as well as the equivalent of 700bhp.

Furthermore, some of the parts used in the system are actually modified parts from the company's Acutus turntable, as well as helping to machine many of the parts on show on the inside and outside of the Lightning Car.

To take a look, and no doubt have a listen, to the Lightning Car, head over to the London Motor Show 2008, starting this Wednesday. It's at ExCeL London, which is also where you'll find the What Hi-Fi? Sound and Vision Show later this year. See here for more information on the motor show.