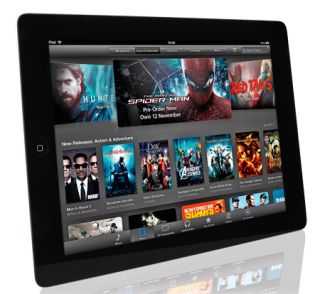 It's official. Apple is to introduce a 128GB iPad 4 with Retina display in the US from February 5th. Mind you, it won't come cheap: the wi-fi only model will set you back $799, and the wi-fi + cellular model will cost $929, making it the most expensive tablet on the market. UK prices to be confirmed, but we suspect they won't be any cheaper.

Apple has released the latest version of its operating system for iPhone and iPad, iOS 6.1.

And iPad mini and iPad with Retina display users can now experience 4G with 23 additional carriers around the world.

Additional updates on iOS 6.1 include the ability for iTunes Match subscribers to download individual songs (rather than entire albums) to their iDevice from iCloud. The cloud download icon now appears against all your individual tracks, not just on albums.

And in the US, owners can use Siri to buy film tickets through Fandango.

At the same time, Apple has pushed out a firmware 5.2 update for its Apple TV boxes, bringing Bluetooth keyboard support to second- and third-generation models, as well as an 'Up Next' feature showing which song will play next and support for browsing and playing iTunes music from iCloud.