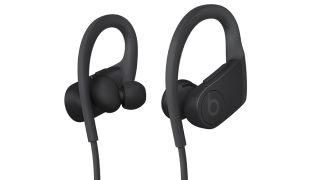 Days after appearing in a Walmart store and months after their impending arrival was rumoured, the Beats Powerbeats 4 have been officially announced.

Simply called 'Powerbeats' (without the nod to their fourth-generation status), they feature the "same audio" audio and earbud design of the truly wireless Powerbeats Pro but instead have a neckband and are much more attractively priced at just £129.95 ($149).

Found in the Powerbeats Pro, the H1 chip enables faster pairing, switching between iCloud devices, and hands-free “Hey Siri” on iOS devices. As we said in our Powerbeats Pro review, "in terms of consistency of connection and ease of pairing, it really is Bluetooth at its best". The potentially bad news is that we didn't find the Pro's sonic performance very compelling – although if it is indeed mirrored in the much cheaper Powerbeats, it should be more competitive. We hope to soon find out just how competitive.

Last – but perhaps not least in the world they arrive in – the cable is now rounded as opposed to flat to minimise contact surface area.

The new Powerbeats wireless headphones will be available from tomorrow in black, white and red finishes. It seems Apple has a few more new products up its sleeve for spring unveils – new iPad Pros, cheaper iPhones and AirPods Studio headphones included – but we don't expect them to come so quietly.