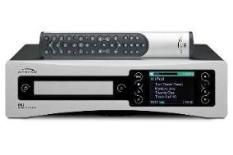 Myryad has a winner. The Mi is packed with useful features and sounds great, too

It may be a little late to the party, but the Mi is Myryad's answer to Arcam's massively successful Solo. That means it's an all-in-one music system with CD, DAB/FM tuner and amplifier. Simply add speakers and off you go.

Like the Solo, the Mi will connect to an iPod, and allow the user to control Apple's portable range via its handset. The connection lead is included as standard.

The main unit's large display works well, making navigation easy. We like the supplied handset too: it's nice to hold and sensibly laid out.

We're less keen on the MI's front panel buttons. They're touch-sensiitve and offer little in the way of feedback – using them is a bit hit and miss.

Given Myryad's heritage, it would have been a surprise if the Mi disappointed sonically. It doesn't. In fact, it sets very high standards for this type of system.

Composed performance keeps control
Sound quality is impressive regardless of source, though (as usual) radio needs a strong signal for good results. That said, it's still CD that produces the best sound. Play The Dark Knight's OST and the Mi produces surprisingly dynamic and entertaining sounds – provided you use decent speakers.

We got good results from Monitor Audio's Bronze BR2s (£230), all the way up to the £2000 Monopulse 42As. This Myryad takes it all in its stride and sounds very much in command.

Detail levels are high, but it's the Mi's ability to track rhythms and produce a bold yet cohesive sound that really impresses.

Go the separates route and you'll get a better sound and improved refinement at high frequencies; but that's missing the point.

Integrated systems are all about trying to get a decent sound from a convenient package. Myryad has gone further than most on the sonic part of the equation.

Arcam's Solo has dominated this arena for a few years now. It now has a rival to fear.