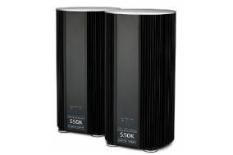 Bend your speakers to your iron will by treating them to an abundance of power: if a £3000 amplifier upgrade appeals, hear these

Morecambe and Wise; pie'n'mash; pre- and power amplifiers. Some
things just go together, don't they?

Well, not according to Musical Fidelity. Its new 550K Supercharger is a power amplifier (boy! is it ever), but it's one intended to complement your existing integrated amplifier.

You split the stereo signal from your integrated, feeding one channel into each monobloc (you obviously need two of them) via either the 550Ks' line-level or speaker-level inputs. The signal comes out, massively amplified via standard speaker outputs. Power is increased to 550 watts, with the attendant gains in verve and control that dizzying figure implies.

This injection of fire really works
To a great extent, the principle works splendidly. A Supercharged recording of The Beatles' Yer Blues leaps from the speakers, alive with dynamic vitality. The drive, attack and sheer brio that's brought to bear are startling.

The higher the volume, the more the 550Ks relish it, rampaging through any source material with absolute and effortless authority. Low frequencies are of an entirely different order: depth, tonal variation and decay are of the impeccable variety.

At less humbling volumes, the Superchargers aren't as explicit, and there's no doubt that the MFs bring their own voice to bear on music.

If neutrality is your watchword, you'll be disappointed. But if you're seeking fireworks, light the blue touch paper, and retreat a safe distance.