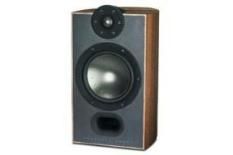 Familiarity certainly hasn't bred any contempt where the Mezzo 2s are concerned.

Lined up against their rivals, the Mordaunt-Shorts still look relatively exotic, their curved cabinets and loft-extension tweeter arrangement providing a welcome dash of visual interest.

Add build quality and standard of finish that's a match for many other rivals, and it's little surprise that the Mezzo 2s have been among our favourite standmounters at the price for ages. And that's before they make a sound.

The Mezzo 2s time and integrate impressively too, and extract a fanatical amount of detail. Low frequencies punch meaningfully, though not as weightily as some rivals, while the top end is crisp and clean.

The overall presentation is fast-going-on-urgent. Poised on the dividing line between clean and clinical, tonally the M-Ss are open and uncoloured – though a thorough investigation of partnering amps is definitely in order.

As clean as they come
That necessity becomes even more apparent with a switch to Arab Strap's Love Detective.

There's no lack of bite or drive from the Mezzo 2s, but while the song has metaphorical dirt under its fingernails and sweat on its brow, the M-Ss don't engage as well as their best rivals – they sound slightly dispassionate where they should be overflowing with feeling.

We can't help thinking that the sheer cleanliness of the M-Ss' tonality can sometimes work against them.

For many people, though, cleanliness is indeed next to Godliness so, as usual, it's a case of getting out to your local dealer and having a good long listen.

The Mezzo 2s may have been forced down to four stars by some new rivals such as the Dynaudio DM2/7 and EB Acoustics EB1, but they're by no means a busted flush.

If you're after good-looking and precise standmounters that are comfortable with a broad range of music, you'll love them – just make sure your amp doesn't make them sound too stark.