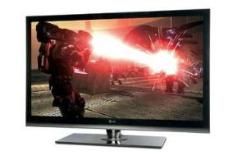 LG is claiming that the 42SL9000 is a frameless design. Let's get one thing clear from the off: the whole of the front may be a single layer, but there's definitely a frame.

This is a winningly slim screen, certainly – less than 3cm deep, in fact – and that svelte silhouette is achieved despite the 42SL9000 being a 'single layer' design that presents a completely smooth face.

But call it what you will – a frame, a bezel, a border – the LG's got one beneath that front layer, and when the 42SL9000 is displaying pictures it's perfectly apparent. So, not only is it emphatically not frameless, but we've seen many screens with a frame narrower than this.

Lots of positives
Beyond that unwelcome and completely avoidable disappointment, this is an intriguing set.

It uses LG's excellent on-screen menus, and the remote control is a tactile cut above LG's usual efforts.

Specification is comprehensive: as well as four HDMI inputs and 1920 x 1080 resolution, the 'SL9000 has LED backlighting and a USB input that's good for movie files up to 1080p.

Performance has highlights, too. 1080p/24fps images are crisp and detailed, with fine edge-definition and impressive insight, and movement is handled confidently (although we prefer the 100Hz TruMotion processing turned off).

The colour palette is generally poised, although we had the devil's own job trying to rid skin-tones of a hint of jaundiced yellow. Contrasts aren't the cleanest, either.

TV tuners do a fine job
The LG's a competent upscaler of DVD images (though complex patterns can provoke varieties of picture noise) and its TV tuners are impressive.

Even daytime TV, where the quality of broadcast bitrates plummet, enjoys crisp edges, assured motion and pleasing levels of detail.

Sound from all sources, by its sheer inoffensiveness, is a notch or two above the flatscreen norm.

Lots to like, then and an attractive screen – but the LG's price suggests a USP that it doesn't have. So it winds up looking a little expensive.