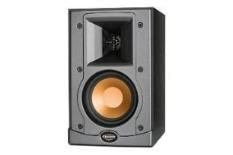 As lively and upfront as we expect from Klipsch, but sound a bit remedial against others in this price range

It's never a good idea to second-guess speaker makers. Take the Klipsch RB-10s: as they're part of the same range as the RB-81s, seen in a past test, we were expecting a couple of brutes.

Instead, the RB-10s turn out to be very compact. Their dimensions almost insist you put them on a bookshelf, one either side of a midi system.

That would be to sell the RB-10s short, though. They're not the most capable design, as we shall see, but they're still a big upgrade on any speakers you might get with a £300-ish all-in-one.

We started with Boards of Canada's Music Has the Right to Children but, to be honest, your choice of source material is neither here nor there.

The RB-10s grab music by the scruff of its neck and give it a good shaking – the excursion of that 10cm driver may be unnerving at first but the Klipsches remain entirely in control, dealing out a brash, energetic and entertaining sound at all times.

They positively relish playing loud, exhibit credible dexterity when the going gets complex, and extract a meaningful amount of detail from recordings too.

Blustering bass is rather blunt
There's decent integration between the hard-working driver and the titanium tweeter hiding behind the elaborate horn arrangement, a solid soundstage and the sort of dismissive dynamic ability that's de rigueur among American loudspeakers.

A listen to Dub Syndicate's Stoned Immaculate exposes the RB-10s' blustering low end as a rather blunt, monotonal instrument that can hamper the lower reaches of the otherwise-poised midrange, and a harder sound when cranked up.

The Klipsches have cheerfully traded subtlety for bungee-jumping thrills and, for some listeners, that'll be an entirely worthwhile trade-off.

So if your budget and room dictate an affordable, dinky speaker and your tastes run to the upfront, you'll find a gregarious partner in the RB-10s.