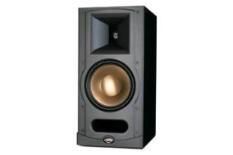 For people who like to party hard and fill their place with bass, these big boys are ready to to audition

Bigger in every direction than any of their rivals, with the largest (20cm) mid/bass driver than we've seen for many a while, and an elaborate horn arrangement ahead of the 26mm titanium tweeter, the Klipsch RB-81s are a substantial proposition.

And at almost 14kg each, they're more likely to bow your bookshelf than sit happily upon it.

If the first item on your 'new speakers checklist' is 'borderline-frightening looks', these American bruisers will go straight to the top of the pile.

Make no mistake, the Klipsch RB-81s have come to party, and they've come to take you with them.

It's this uncomplicated character that's a big part of their charm. Given the peerless pop of Kylie's Can't Get You Out Of My Head to deal with, the RB-81s sink their teeth in and don't let go.

They're as powerful, direct and attacking as the looks suggest, steaming through the song with alacrity.

Timing is good, integration impresses – but all these admirable traits play second fiddle to the Klipschs' primary function: the generation of the sort of punchy, solid and plentiful low-end action that will have you falling out with your neighbours.

The bass the RB-81s produce is tonally varied, well controlled, and starts and stops promptly, but, blimey, there's a lot of it.

Bass steals the limelight
They're not quite a one-trick pony, though. Smog's Dress Sexy At My Funeral is no dancefloor anthem, but the RB-81s are adaptable enough to deal with the light and shade – the midrange is expressive and the tweeter hiding behind its horn is crisp and bright without becoming splashy.

Inevitably, it's the Klipschs' greatest strength – their prodigious low-frequency presence – that is ultimately their undoing.

There's simply no neutrality here: for all its control, the bottom end is the main story and the rest of the frequency range has to sit in the shade.

If you're primarily concerned with shifting the air in your listening room in great big gusts, these likeable brawlers are just the ticket.