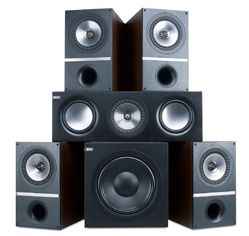 Style-orientated compact speakers are easier to install and more discreet to live with than larger conventional designs, but often that convenience comes at a cost to sound quality per pound, especially if musicality is high on your agenda.

The wise speaker manufacturer attempts to cover both bases. Hence this new Q300 5.1 system from KEF, a speaker system that costs not a great deal more than the Maidstone company’s flat-speakered T105 package.

And if you trade in a pair of old speakers – any brand or age – at a participating KEF retailer, you'll get a 20% discount, bringing the price down to an even more reasonable £1504.

Although wearing the same badges and occupying roughly the same price class, the two systems could not be more different from each other.

Don’t fear the speakers
The Q300 5.1 is all about performance, and if that imposes a few inconveniences to your living-room’s feng shui, then so what? It sounds wonderful with movies and music, and whether you’re listening in surround or stereo mode.

Voices have more character and nuance than many rival systems can muster, timing is excellent, and the midrange is first-rate.

To deliver such ability, the KEF’s five main speakers – two pairs of five-star-rated Q300 standmounts, plus a Q600c centre channel – employ the same 16.5cm Uni-Q driver array, the centre being bolstered by an additional bass unit plus a matching passive radiator.

In purist terms, that drive-unit symmetry is fabulous. It delivers the broadest, most tonally accurate and most cohesive soundfield that we’ve heard at this price for some while: each speaker in the system sounds the same as the next.

A subwoofer rounds the system off, of course, and it’s a good one: the Q400b is a simple sealed-box cabinet with a forward-firing 25cm bass driver plus 200W of Class-D power, and it’s an agile, taut-sounding complement to its companions.

A big presence – visually and sonically
Any downsides? Only one: you’ve got to be sure you want a Q300 5.1, because there’s no hiding this lot away. Its performance-first approach necessitates a chunkier-than-normal centre speaker plus a pair of rear speakers that most homes will struggle to wall-mount discreetly.

If you can put up with that, though – and at the price, we suspect you’ll cope – there’s really nothing else to complain about.