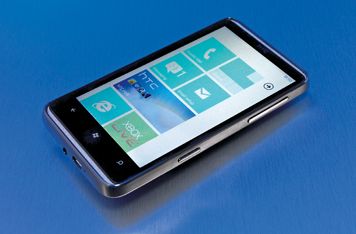 A much-improved operating system, let down by mediocre multimedia performance

Until now, Windows Mobile (as the OS was formerly known) hasn’t really endeared itself to the mobile crowd, paralysed, as it was, by glitches.

Microsoft has gone away and come back with Windows Phone 7 (WP7). And, seeing that HTC is a seen as a cool brand with buckets of street-cred, the HD7 appears to be the perfect vessel for this new operating system.

Superb, premium feel
The HD7 is a gorgeous device with a premium look and feel.

It’s a serious rival for the iPhone4 in terms of loveliness, and makes the Samsung Galaxy S feel a little Fisher Price in comparison. The front of the unit is just a large glass screen, with no physical buttons on show. Instead, there are three touch-sensitive keys for back, home and menu.

Powered up, the HD7’s appeal goes from strength to strength. First, you notice that the 4.3in screen dwarfs most of its rivals.

You’re then greeted with WP7’s new ‘tile’ interface, which gives you one-touch access to your favourite features and apps. Hit ‘HTC Hub’ and you’re taken to Windows’ new ‘hub’ interface, with a more comprehensive list of games, applications, and other content on the phone.

It’s much improved from the old Windows Mobile experience. Your impression is also helped by the HD7’s remarkably slick and responsive 800 x 480 pixel touchscreen.

Managed By Zune
It’s a Microsoft operating system, so it’s no surprise that Zune software manages all your content.

You can buy additional content to fill the 16GB of storage through the Zune Marketplace. There’s a fine selection of music, videos, apps and podcasts available, and the software is uncomplicated to use.

But while the front end of the HD7 warrants some generous praise, the multimedia performance of this device somewhat lets it down.

Sound quality doesn’t impress. Tunes sound cold and thin, lacking body, warmth and weight. There’s very little in the way of scale and dynamics, and that’s even after you’ve rejected the supplied headphones in favour of a more capable pair.

Initially, picture quality looks pretty good. Whites look brilliant and the screen’s colour balance is arguably the most natural-looking of the bunch.

But, traces of blocking can be seen on the picture, and movie content doesn’t have the same stability as the very best available.

No Flash or iPlayer
Web browsing is done on a special version of Internet Explorer and this works well, although there’s no Flash support, so you won’t be able to view certain content.

There’s also no way of being able to stream video from the likes of BBC’s iPlayer, which is somewhat disappointing.

After all the aesthetic appeal added to the promise of the WP7 operating system, it’s a shame that you’re left feeling a little let down by the HD7.