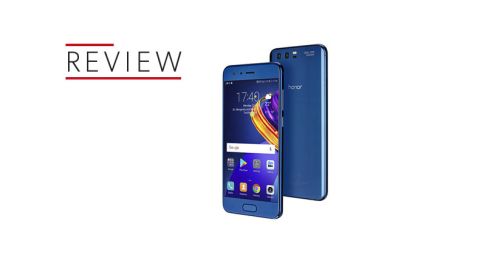 With features you’d expect from a more expensive phone, the Honor 9 has usurped OnePlus as the de facto high-end smartphone for anyone on a budget - even if overall performance is good rather than great.

It has premium looks, clever dual cameras and underlying hardware that can rub shoulders with the best 2017’s smartphones have to offer so far.

But the Honor 9 is more than a list of specs. It’s a statement of intent, designed to show there’s not just one flagship assassin out there. With the OnePlus 5 arriving at a much higher price than last year’s 3T, there’s every chance Honor can fill the void.

By using parent company Huawei’s own P10 as a starting point, then doubling down on styling (and seriously slashing the price), the Honor 9 looks every bit the budget champion.

In the right light, the Honor 9’s flashy glass back is a real attention-grabber. Those 15 layers of glass create a shiny, kaleidoscopic effect. The reflective finish helps disguise any fingerprint smudges too, although it is surprisingly easy to scuff and scratch.

The metal-and-glass sandwich looks undeniably slick, thanks to curved glass on both front and back, camera lenses that sit completely flush to the glass and stealthy antenna lines blending beautifully with the aluminium frame.

Whether you opt for the brilliant blue model we tested, the more subtle grey or mirror-like silver, it looks every bit a high-end phone.

Elsewhere, the Honor 9 is rather conventional. You’re not getting a bezel-breaking screen like you’d find on a Galaxy S8 – that’s still asking too much at this price.

The compact dimensions make it easy to handle, even with the fingerprint sensor, which has been relocated to the front of the phone. It’s a lot more manageable than any 5.5in handset, and arguably on par with the iPhone 7 in how comfortably it sits in the hand.

There are even a few extras here you won’t get on Apple’s more expensive phone, like an IR blaster in the top and microSD card expansion next to the SIM card slot.

Shifting the fingerprint sensor from the back of the phone to the front might have forced Honor to shrink the screen down from 5.2in in 5.15in, but there’s little difference between this and last year’s Honor 8.

It sticks with the same Full HD resolution, which is still perfectly acceptable on a mid-range phone – even if the flagship handsets the Honor 9 wants to compete with have all made the jump to QHD (or beyond).

Resolution alone doesn’t define image quality, sure, but the Honor 9 doesn’t truly excel in any other area either. It’s decent for the money, but not really exceptional.

There’s ample brightness, although it’s best to save the highest settings for when you’re outdoors in direct sunlight. Dialling it down slightly helps darker scenes have more acceptable blacks, because contrast isn’t the strongest.

Sharp outlines give the impression of strong detail, but look closely and you’ll see this isn’t always the case.

Facial features might be well defined, but skin is overly smooth. This applies to clothing too, where textures lack the realism and depth you’d expect, even though the main outline looks perfectly crisp.

Like Huawei’s more expensive P10, colours here are overly vibrant. They lack subtlety as a result - even in the technicolour assault on the senses that is Guardians of the Galaxy Vol.2.

You can fine-tune the colour temperature in the Settings menus, but finding a natural-looking result that compares favourably to more expensive hardware is difficult.

It’s fine for general watching, but spend a little more and the OnePlus 5 offers a more nuanced viewing experience.

Much like the screen, the Honor 9’s audio abilities don’t elevate it beyond its more expensive rivals - though it turns in a respectable performance.

For starters, things sound less congested than they do on the OnePlus 5, with a wider presentation and pleasant amount of space. James Blake’s melancholy vocals on Radio Silence aren’t eclipsed by the oppressive synths or drum track.

Like many smartphones, it struggles with timing on more complicated rhythms. But it stays fast and upbeat throughout the soulful drum 'n' bass of Nu:Logic’s Somewhere Between the Light. There’s a respectable amount of definition in the top end, which stops punchier tracks from falling flat.

Big changes in intensity still lack the impact we’d like, though, with the dynamics not quite building enough scale or punch. The DSP tuning, performed in partnership with Monster, helps give it the edge over Huawei’s own P10.

Officially, the Honor 9 supports hi-res music up to 24-bit/192kHz - but the stock music app lists all our test tracks as “SQ”. It’s not clear whether these files are being downsampled, and it’s doubly confusing as regular MP3s are contradictorily listed as “HQ”.

A 3.5mm headphone port means you don’t have to mess around with dongles or adapters, which gives it an edge over the iPhone 7 and HTC U11.

The single speaker at the bottom of the handset was tuned by Grammy-winning engineer Rainer Maillard - not that it makes much difference. It goes loud enough to listen to podcasts or YouTube videos without needing a pair of headphones, but push it too high and it becomes thin and tinny.

Its camera may not rival the more expensive competition in terms of quality, but the photos it takes are good.

The 20MP monochrome sensor adds sharpness to each 12MP snap, but zoom down to the pixel level and you’ll spot a fair bit of noise, depending on the shooting mode.

Dynamic range is decent enough, with both outdoor and indoor scenes showing plenty of contrast. The HDR mode copes well with backlit subjects, even though you’ve got to manually enable it first.

But there’s no optical image stabilisation, which impacts on low-light performance. You’ll need a steady hand, and the overly noisy results don’t compare well to the iPhone 7 or Samsung Galaxy S8.

Actually taking photos with the phone is great, thanks to a speedy and simple app.

It’s quick to focus, and uses the two sensors to add extra modes (like a wide aperture setting for mimicking the effect of an expensive DSLR camera to blur the background). It’s not perfect, but can elevate simple snaps with minimal effort.

Up front, the 8MP does a good job with selfies, although Honor’s face-smoothing Beauty mode is as aggressive as ever.

The Honor 9 is seriously powerful for a mid-range phone, thanks mainly to the Kirin 960 CPU. This 2.4GHz, octa-core chip is the fastest silicon Huawei makes, and is on par with the Snapdragon 835 you’ll find in flagship handsets costing twice the price.

It helps Android 7 feel perfectly responsive, with no delays or lag while switching between apps or scrolling through web pages, even with the overbearing EMUI interface running on top.

This replaces the stock Android icons, menus and home screens with Honor’s own, which have a decidedly iPhone-esque look.

It won’t be to everyone’s taste, but at least you can turn off the multiple home screens and switch back to the traditional app drawer layout with just a few taps.

The 4GB of RAM is enough to keep things ticking over, even when you’ve got a home screen’s-worth apps open at once. The Mali-G71 GPU is a great match for the Full HD screen too, with enough grunt to play just about any game smoothly.

Even the fingerprint scanner unlocks the phone almost instantly. It can also replace the onscreen buttons, freeing up screen space and using shortcut keys to get around the OS instead.

The taps and holds take some getting used to, but they make sense when EMUI is so radically different from vanilla Android.

All this power does come at the expense of battery life, though. With mobile streaming and a bit of video playback, the Honor 9 will be out of charge before the end of the day. Stick to simpler apps, and just play music saved to the 64GB of onboard storage (or on a microSD card) and you’ll get closer to a day and a half.

The 3200mAh battery does support fast charging over USB-C, at least, which can refuel you back up to full in just a couple of hours.

For the past few years, Honor has played second fiddle to OnePlus and its succession of great-value phones. This year, the OnePlus 5 is no longer a budget bargain, which makes this the best phone around for less than £400.

By using Huawei’s P10 as a starting point, Honor has created a phone that looks good, has pleasing performance and a capable dual camera set-up. It also manages to add expandable storage into the mix, which is something you won’t find on the OnePlus 5.

However, its version of Android will divide opinion. It isn’t water-resistant. Battery life is only average. The decision to stick to Full HD makes sense to keep costs down, but picture quality isn’t outstanding either.

Still, it’s tough to find better for less. Unless you’re prepared to make a significant investment in a 2017 flagship, this is as much phone as you’ll get for your £400 right now.

See all our Honor reviews