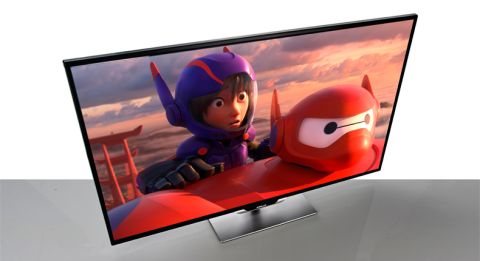 Not quite the 4K fulfilment, but a reasonable picture for the money

See a 55in 4K TV for £1000 and you’d be forgiven for jumping at the chance. Most on the market are double that price. But then, eye-popping prices are Finlux’s forte – and often pleasing for the performance the tellies offer.

Sadly, the same can’t be said here, for the troubles and tribulations of 4K and the knotty standards and specs that go with it are personified in the Finlux 55UT3E242S-T.

While the TV is indeed the 3840 x 2160 resolution, 8.3 million pixel-packing affair it promises to be, it lacks the technology to play most of the 4K material available today.

Although the Netflix app sits at the centre of its smart portal – and a search for ‘4K’ and ‘Ultra HD’ brings up plenty of results – the Finlux doesn’t have the necessary coder-decoder hardware to stream the material in 4K.

Nor does it have Google’s VP9 decoder, so that’s YouTube’s 4K content out of the window too. However, both apps can play regular HD and SD content, joining BBC iPlayer in the set’s smart offering.

And though three USB inputs enable media playback and live TV recording (programmes can be momentarily paused when one is attached), none can support video formats over 1920 x 1080.

The Finlux does have the HDMI 2.0 spec needed to support 4K though, so feeding it content from a 4K source via HDMI connection should work.

Clearly this TV isn’t going to be your best bet for 4K playback, but for high-def content – by far the biggest slice of the content cake – it’s actually pretty good.

Thanks to the Finlux’s decent upscaler, you get a good quality HD picture. It has no problem filling the 55in screen with sharp outlines and good detail levels. Plunge into Fury Blu-ray, and there’s texture to the torn-up fields as the soldiers trudge through them and good insight into scars etched onto faces. There’s subtlety in shading and detail in the soldiers’ muddied, wounded faces.

The film is rife with earthy colours – khaki uniforms, dreary landscapes and jaded faces – but the Finlux proves shrewd enough for you to tell them apart. The picture could easily look dull and lifeless, but the bold and (a little overly) rich hues make even the bleakness of war look interesting.

Contrast is reasonably strong: fires burn brightly against the dark night skies, and white paint on the black tanks has punch.

With ‘Film Mode’ activated in the picture settings, motion is largely well handled as the camera pans across fields and tanks bump along uneven ground. But in faster motion scenes, just a hint of judder is present.

Try the Finlux’s hand with standard definition – Exodus: Gods and Kings on DVD – and as much as the upscaler tries, it can’t hide the resolution drop. There are traces of picture noise, and you can detect a slight blur around galloping horses.

But clarity levels are reasonable enough for you to happily tuck into action scenes. Colours are bright and punchy, the golds and reds of the ornate armoury and chariots bright and vivid, but again rather overdone.

The Finlux struggles to keep a lid on is its exuberant colour palette with standard-definition TV channels, though: colours are pretty ‘out there’ with little sign of nuance, and the picture loses its cleanliness. High-def channels fare better, though neither look as good as on some of last year’s cheaper Full HD-only sets.

The set supports passive 3D, with eight pairs of glasses supplied. Hugo 3D on Blu-ray is bright and clear, although it’s not the most stable picture we’ve seen. As the camera circles the train station, objects become noticeably blurry.

Finlux’s interface has gone in a different direction (literally). Gone is the horizontal gold-on-black menu and in its place a vertical sidebar, which trails down to the left of the screen.

It’s a far cry from the lavish affair on big brand TVs, but the more attractive graphics and less intrusive menus are an improvement. There is direct access to settings, live TV, media browser and full-page smart portal, though a separate tab for installation seems superfluous when it’s often a one-off process.

The new 2015 remote control is another improvement. Its flatter build and ridged back help with ergonomics and the button layout is logical. While more brands ditch app remotes, Finlux has finally come onboard.

Its Smart Centre App is a convenient, intuitive way to perform basic functions and share smartphone content with the TV. The highlight, though, is its comprehensive EPG.

The moral to the story: if it sounds too good to be true, it probably is. Without broad 4K playback compatibility it’s barely worth buying this telly.

If you are bothered about watching 4K, you’ll have to dig deeper into your pockets. And if you aren’t, you can still pick up a better Full HD TV for the money.