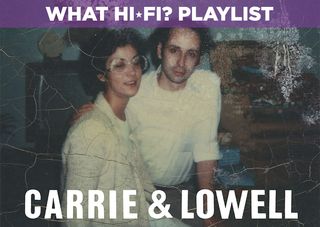 Given how very prolific Sufjan Stevens has been since his debut album A Sun Came was released in 2000, it’s a medium-sized wonder his prodigious gifts for melody and harmony show no signs of waning.

For Carrie & Lowell Stevens has moved away from the angular electronic edge of 2010’s Age Of Adz in favour of a (slight) return to the lo-fi folk-inflected intimacies of his most celebrated recordings.

Stevens has always been a direct, emotionally unflinching lyricist, and the death of his mother Carrie in 2012 informs almost every one of these 11 songs in one way or another.

But as is often the way with Sufjan Stevens, there is hope amid despair, redemption where all might at first seem lost. Death With Dignity, All Of Me Wants All Of You and The Only Thing might be among the bravest and most direct ‘pop’ songs ever recorded.

There’s not much going on in terms of dynamism or tonal variation here, but in certain respects this is as big a test as your set-up will get all year.

Plus it’s human, and heartfelt, and there’s no system inferior enough to stop that shining through.

Standout track: The Only Thing – “In a veil of great surprises, I wonder did you love me at all?”