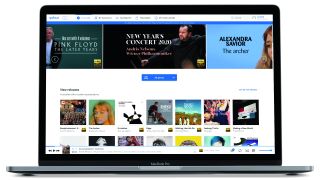 If any music service can claim to be a veteran of high-quality streaming, it is Qobuz. The French streaming (and download) service was the first of its kind to offer CD-quality (16-bit) streams and, in 2015, it became a primary patron for hi-res (24-bit) streams. So while Amazon Music HD has only been going five months, Qobuz has been hi-res streaming for five years.

Amazon's entry into the hi-res streaming market – making it the first of the 'big three' (Apple, Amazon and Spotify) to go there – is a significant one. With Amazon Music HD now a direct competitor to Qobuz, is it game over for smaller streaming services? Or will its arrival in the market spread the hi-res message louder and further than Qobuz ever could?

“We knew it was coming," says Benoît Rébus, Qobuz's Head of Global Innovation and Partnerships. "It is never good to be alone, so we were waiting for big players with a loud voice and marketing money to bring the benefit of artist endorsement. We only have a little voice.

"Since Amazon’s launch, we’ve done nothing but grow. People are realising that there’s something else on the market – they’re being told that what they currently get at Spotify isn’t hi-res at all."

But with Amazon’s greater subscriber reach and resources, not to mention its more affordable monthly cost (£14.99/$14.99), Qobuz has had to react.

The elephant in the room: price

Qobuz recently announced that it was going to ditch MP3s altogether: "It has been 20 years, it’s time to move on," says Rébus. Qobuz’s Premium (MP3) and HiFi (CD-quality) subscriptions will soon be gone, leaving just the Studio (£25/$25 per month) and Sublime+ (£250/$300 per year) packages.

Both offer access to a CD-quality and hi-res catalogue, but the latter is an annual-payment-only option that also offers discounts to its download store. Meanwhile, in the US, Qobuz has relaunched with just one competitively priced tier.

"Our issue was price, so we reduced it with our Studio Premiere plan," says Rébus. "We thought four tiers were too many – Qobuz customers come here for hi-res, not MP3s. The beauty of the US relaunch is that now it’s one single subscription of $15 per month, which is below Tidal and Deezer," says Rébus.

"Before reducing the price, we had to make sure we could keep our margins, so we talked to the labels and this new price allows us to do that. Now, we have to deal with each label in each country, so it takes time… but our interest is in democratising hi-res." However, until it can achieve this, Qobuz remains pricier than its hi-res streaming rivals in other markets.

Qobuz is also attempting to bring down costs by introducing a Family Plan. "Our customers tend to accumulate services: Qobuz for themselves, and maybe Spotify or Apple Music for the kids," says Rébus. "But with Family Plan, we think parents are more likely to get rid of Spotify, because something better exists,” he adds.

But, as our recent review of the service noted, Qobuz won't be perfect for everyone. While it claims to have the biggest library of 24-bit tracks among its competitors – almost double Tidal's number – we would often find albums on Tidal, Spotify, Apple Music and Deezer that weren't available on Qobuz at all.

Rébus acknowledges the shortcomings of its service, saying: “We differentiate ourselves with our catalogue. Others are pushing mainstream music, whereas we try to push emerging artists and not just pop music.” Arguably that's what its subscriber base, largely comprising music enthusiasts aged over 40, wants.

Despite a decline in the popularity of downloading music, Rébus claims that Qobuz's download service, Sublime+, is doing well. Downloading hasn't been totally neglected, not least as Qobuz expects downloaders to move to streaming eventually.

Qobuz is currently working with partners such as Aurender and Bluesound to find ways of improving the download experience. One possible feature could be to enable automatic downloading of any track or album purchased on your smartphone onto any connected servers you have at home.

Qobuz prides itself on its 24-bit ecosystem: with streams widely supported across the hi-fi industry, most recently by Naim and Cambridge Audio. Another one of Qobuz's unique selling points is that its catalogue supports albums with extended metadata and reading material, such as booklets and articles.

“With Amazon you get the quality of course, but that’s kind of it,” says Rébus.

Amazon has committed itself to 3D audio (Dolby Atmos Music and Sony 360 Reality Audio), voice control (Alexa) and AI search features – all features Qobuz has an eye on in order to grow the business.

“We were supposed to be a launch partner of Sony, but had some delays – we’re a small company that has to choose its priorities. It has opened up a new market... there’s the impression hi-res is for geeks and audiophiles and you need a super expensive system, whereas with [3D audio] you can just use regular headphones.”

“It’s a good opportunity for us, but the catalogue is limited to around 2,000 tracks. We have to make sure it’s not only about Drake and The Weeknd, but also our style of artist.

“Voice [control] is tricky because we’re catching up. We will take small steps and start [integration] with 'play my favourites', for example. Now that the US is our second market, Alexa makes sense because they’re very proactive. Amazon has more manageable tools than Google… whereas Amazon is more self-service.

"We’re also thinking about our own voice assistant. We need to address Alexa and Google customers, but there are limitations in terms of languages, audio quality and codecs," says Rébus. "Alexa can’t play hi-res content… well, Amazon can, but we can’t. As a brand, it’s important to have direct contact with our customers. We want to remain independent," he adds.

Qobuz is also aiming to make music easier to discover: "The more they listen, the longer they'll stay," says Rébus. "All our recommendations are human recommendations – our users love it. But we’re developing our own internal AI solution based on a collaborative algorithm.

"We wouldn’t drop hand-picked recommendations – it’s important to keep that alive, and we also want to leverage the Qobuz community, so that users can recommend songs to others. In 2020, we will start releasing weekly automated playlists, based on what they've been listening to."

Qobuz is clearly ambitious, then, aware that it needs to be to survive now that big players are joining the game. It's confident the new features on its 2020 (and beyond) roadmap, combined with the service's core differentiators next to its increasing number of competitors, will keep it afloat. And as hi-res streaming is building momentum, there are undoubtedly many, us included, who hope Qobuz can continue riding it.