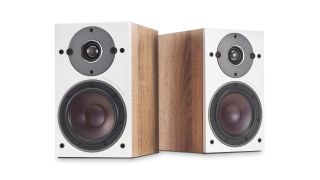 Strangely, when you consider that this system doesn’t have a turntable in it, it feels a little more old-school in its make-up.

There are plenty of people who ditched vinyl long ago and have no desire to go back, especially when they have invested so much in their digital music collection, in the form of the compact disc. The CD is still going strong, of course, although digital downloads and streaming are without doubt the future of our music sources.

Here, we have a fine CD player and amplifier combination and married it with an excellent music streamer so you can have the pick of your collection from the early 80s through to the modern day. And, of course, a pair of speakers that can really do the rest of the system proper justice.

The Marantz pair you see here is, on the face of it, a standard hi-fi system that you might have seen in the 1990s: a CD player and amplifier, paired with some speakers, was pretty much where most people’s hi-fi experience started and ended. And it’s a strong set-up – especially when you use this Award-winning Marantz pairing.

When it comes to CD players, few manufacturers come close to matching Marantz’s track record. The company has always been a strong force in this area, but in recent years it has made the more affordable end of the market its own by producing a long series of class-leading machines.

The CD6006 UK Edition gives no sign of that vice-like grip easing. Its features set is much as we’d expect from a player at this level. There are optical and coaxial digital outputs alongside the standard RCA analogue feed.

At the front you’ll find a clear display and simple button layout. There’s also a USB input, which allows the connection of USB devices. It’s compatible with MP3, WMA, WAV and AAC files.

Once we start listening, it doesn’t take long to discover that Marantz has done a terrific job with tweaking this UK Edition.

The new player delivers a crisper, clearer and more robust sound than the highly rated original. None of the base version’s much-admired refinement has been lost, but there are notable gains in the ability to dig deeply into the fabric of the recording. The standard player sounds a little blurry and dynamically restrained in comparison. This is the finest CD player at anywhere near this price.

And there is no better amplification partner for it than its amplifier stablemate. The PM6006 UK Edition has had similar tweakery performed on it for the UK market – and to equally beneficial effect.

Class-leading amplification If you own the original PM6006, there’s no need to trade it in. But if you’re in the market for a stereo amp, then this is just about the finest performance you’ll get in return for this amount of money.

It’s a characteristically full-bodied and focused Marantz presentation, with plenty of detail to boot. Maybe the most granular textures aren’t so readily on offer – this amp favours a smoother and more wholesome overall tone – but there’s more than enough to dig into without becoming overly analytical or losing any sense of musicality. And musicality is one of the PM6006’s strengths.

The balance is tonally even and overall it’s pleasingly insightful, with a nice wide soundstage – but even more so it’s rhythmically and dynamically confident, knitting together instruments in a manner that highlights this as a budget-to-midrange gem.

There’s a certain smoothness between strands, yet also enough punch and drive to grab attention, with the Marantz’s keen sense of timing accented by an impressive amount of dynamic expression for the money.

These aspects can, of course, be improved upon if you’re willing to pay, as with any other facet of performance – but the PM6006’s talents are such that it will musically trump many amps much further up the food chain.

With the best will in the world, though, a CD player isn’t really enough as far as a source is concerned in today’s world of digital files and streaming. To complete our source material here then, we need to add a streamer. Enter Audiolab’s 6000N Play, a current What Hi-Fi? Awards winner, as are the two Marantz units.

The foundation of the Audiolab’s streaming experience is based on another’s creation; DTS’s Play-Fi hi-res, multi-room platform. Having Play-Fi at its software core means that when connected to a network through ethernet or its dual-band wi-fi, the 6000N Play can access services such as Spotify Connect, Tidal, HDtracks, Deezer, Qobuz, Amazon Music, Napster, TuneIn, iHeartRadio and SiriusXM.

It also means it can stream hi-res music files up to 24-bit/192kHz from networked servers, thanks to DLNA and UPnP compliance. It can also connect wirelessly with up to 32 other Play-Fi equipped devices for a multi-room set-up, should you so desire.

The Audiolab reveals a wide-open canvas, sonically, colouring it with well-imaged detail lavished with a welcome amount of subtlety and space. It has insight to capture quality and there’s the dynamic interest to convey subtleties in music.

It’s not as if the 6000N Play is unpunctual or not musically on the money. As we bring our listening to an upbeat close, the New Pornographers’ Champions Of Red Wine is driven with pace and precision as the drumbeat thrums away and the melodic electronica cascades. Consider us entertained.

The final part of this system jigsaw is the speakers. And Dali’s excellent value Oberon 1s fit the bill brilliantly. About the size of a shoebox, the 1s keep strictly to convention as far as design is concerned.

Speakers this small are never going to produce loads of bass. That accepted, the laws of physics being what they are, we’re left with a wonderfully articulate performer that marries a bold, forthright nature with the kind of refinement and insight that’s rare at this level.

If you’re looking for a small, unfussy pair of speakers, we can’t think of anything more capable at this kind of price than these Dalis. They really are a joy – and are the cherry on the top of this compelling CD/streaming system.