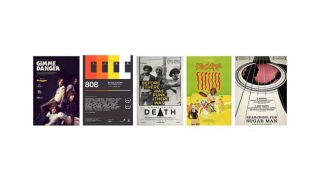 But, of course, that is way too much to sift through in an evening – especially when for every must-see biopic there are at least 20 benign music videos waiting to thieve your down time.

We've tried our best to help with this list of 12 films, which should provide at least something for everyone.

If you've not yet seen Searching for Sugar Man, best return to this list in an hour-and-a-half once you have.

The story traces two fans' pursuit of the truth behind the rumoured death of one of their favourite artists, Sixto Rodriguez. His due success eluded him in America, but he unknowingly found a home and a following in Apartheid South Africa.

Winner of both the Academy Award and BAFTA for Best Documentary, its narrative is as bizarre as it is entertaining. It's enough to give hope to all of us that someone, somewhere may actually be appreciating our work for what it is.

Stephen 'Sugar' Segerman, who made the film with Craig Bartholomew Strydom, co-owns Mabu Vinyl in Cape Town, which we included recently in our 25 record stores to visit before you die feature.

Directed by Dave Grohl, Sound City chronicles the studio of the same name.

More than merely another collection of empty superlatives and talking heads – though Young, Petty and Stevie Nicks all feature – Grohl's passion for the space and its history is patently clear throughout.

Roland's TR-808 drum machine didn't sound like real drums. It's why it was widely panned upon its release in 1980, and why it has since become one of the most influential instruments in modern music.

With interviews from those who used it so successfully – artists as diverse as Damon Albarn, Afrika Bambaataa, Beastie Boys, Goldie, Phil Collins and (hey!) 808 State – and closing with words from one of the men behind its creation, 808 is a documentary charting just how creative freedom can be born of technology.

Before there was punk, there was a band called Death.

It's still probably about the most punk thing you could do: pre-date the genre and leave your demo tape gathering dust in the attic for 30 years until it finds its audience by happenstance.

David, Bobby and Dannis Hackney – three brothers from a family of eight children born to a Baptist preacher and his wife in 1950s Detroit – formed Death (whose name and their refusal to change it went some way to ensuring they never got a record deal) in the family's spare room, and this is their story.

Okay, so Death may have been the first punk band - but for the genre to exist at all it needed the seeds planted by The Stooges.

Driven largely by the anecdotes of Jim Osterberg, better known outside his family as Iggy Pop, Jim Jarmusch's Gimme Danger documents and celebrates the career and influence of what he calls "the greatest rock 'n' roll band ever".

View The Stooges on Amazon

Heima is a film deserving of a big screen.

Following avant-rock group Sigur Rós on their tour around Iceland in 2006, it captures not only a band reaching its peak but a country whose landscape could hardly be more beautiful if written into a fairytale.

Theodoros Bafaloukos's Rockers started life as a documentary, and as a result is about as athentic a snapshot of late '70s Jamaican culture as it would be possible to find in a feature film.

It stars former Studio One drummer Leroy "Horsemouth" Wallace playing himself – in his own home, with his real-life wife and children – fighting for the oppressed Jamaican musician against the industry mafia.

Also starring reggae artists such as Burning Spear and Gregory Isaacs, it's a film that endures for its music, its humour and its portrayal of Kingston culture – not least the fashion, which was written about in Vogue.

Can't You Hear the Wind Howl? The Life and Music of Robert Johnson (1998)

It would probably be difficult for any documentary about Robert Johnson – the man who, according to one urban legend, sold his soul to the Devil in return for his talent – to be boring.

But even a life, and indeed death, so shrouded in mystery and rumour still cannot overshadow the enduring power of his music. Narrated by Danny Glover, Can't You Hear the Wind Howl? focuses on both the man and his extraordinary talent, through interviews and dramatic re-enactments.

Watch Can't You Hear the Wind Howl? on Amazon Prime

If the music of Sigur Rós could have been created nowhere else but Iceland, this is the story of music born in the American desert.

The exploration of a culture as much as the bands (such as Kyuss and Queens of the Stone Age) born out of it, Lo Sound Desert takes a generator and its gear out into the middle of nowhere and has a party where the police aren't watching.

"It was the first time French music made it into the International scene since Charles Trenet and Edith Piaf," journalist David Blot says in French Waves.

The documentary now hosted on Amazon Prime was made alongside a webseries, interactive website and live tour - it tells the story of French electronic music, in particular the 'French Touch' style of house music that permeated Europe and beyond.

The webseries is also still available on the official site, comprising ten interviews with artists such as Bob Sinclair, Fakear and Breakbot.

Finding Joseph I: The HR from Bad Brains Documentary (2016)

Finding Joseph I isn't so much a celebration of his legacy, however, as much as an investigation into the man himself: his enlightenment, devotion to the Rastafarian faith, and sadly often fragile relationship with his own mental health.

Gifted a Super 8 camera in 1977, Roxy Club DJ Don Letts set about recording over three months what transpired to be the genesis of punk rock's revolution in the UK.

All performances in the film but that of the Sex Pistols – the first with Sid Vicious in the band – were recorded over three months at the Roxy, and, though you shouldn't expect Oscar-winning camera work, you'll find bracing sets from The Clash, The Slits and Siouxsie and the Banshees.