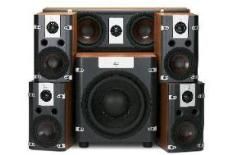 The Dali Lektor 1 is smaller and smarter than your average standmount loudspeaker. Their potent combination of balance, articulacy, speed and dynamism would seem to lend itself readily to home cinema duties.

Joining two pairs of Lektor here is a Lektor LCR as centre speaker – though, as the name (Left Centre Right) suggests, Dali feels this can see service all the way across the front of a cinema system – and the subwoofer.

This is a forward-firing design with a downward-facing reflex port and a claimed 300 watts of amplification on board.

The Foo Fighters' Live at Wembley Stadium Blu-ray is our first port of call, and the system establishes its credentials early and decisively.

The sound is agile and attacking, with impressive tonal variation from the sub and uncluttered, natural vocals.

A switch to the equally testing Iron Man Blu-ray is a slightly more qualified success. All the attributes of pace, eloquence and dynamic heft are to the fore, but there are chinks in the armour.

There's a discernible lack of impact from the front left-and-right channels, though this can be dialled out if you can back the speakers up until they're close to a rear wall.

Low-end lacks tautness
Of greater concern is the Lektor subwoofer's rather soft centre. The Lektor 1s have a relative lack of low-end presence and, though the sub integrates smoothly enough, there's not the punch and solidity the movie requires.

The greater the histrionics, the more the sub struggles – there's decent extension and fluent tonality on tap, but where a sub primarily needs to rack up points the Lektor isn't tough enough.

The sub's strengths make this set-up a pleasure when listening to stereo music. About the only criticism we've levelled at the Lektor 1s concerns low-end prowess, and with the sub contributing fluid depth to the likes of The Flaming Lips' A Spoonful Weighs a Ton that criticism is successfully addressed.

No one buys five speakers to listen to stereo music, though. Five-sixths of this system performs admirably, and the remaining sixth is in some ways very impressive – but we want iron-fist authority from our multichannel system as well as velvet-glove persuasiveness.