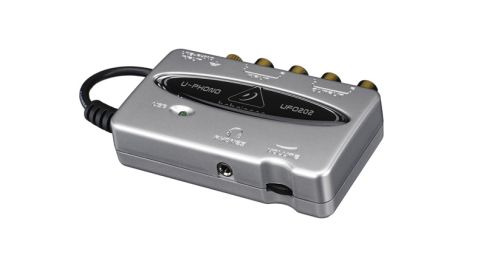 There are certain times Behringer’s UFO202 would be just the ticket, but as a hi-fi component it is every bit its budget price tag

What can you get these days for less than £30? Barely anything in hi-fi beyond some short lengths of cable, certainly not a decent night out... and you’d be lucky to get far whether you travel by car, bus or train.

But what about ripping all of your old analogue recordings to digital?

One of the world’s foremost pro audio manufacturers, Behringer, has mastered the art of creating affordable, quality components for musicians. Visit any teenage guitarist’s bedroom and you’re as likely to find one of the company’s stomp boxes as you are an unwashed Appetite For Destruction t-shirt.

The U-Phono UFO202, then, is quite the proposition: a phono stage capable of transferring all your records and tapes into the digital domain, and available from a brand with profile for under £30.

It is something of a departure from the more usual ripping phono amps we’ve tested, in that its primary selling point is as an add-on for home recording rather than as a hi-fi component. However, it is fully equipped to be used in the traditional fashion.

Light as a box of matches and not dissimilar in size, physically the UFO202 does not contradict its price tag.

At the top of its plastic casework are input and output RCA connections, and a switch to alternate between phono and line inputs. The underside is reserved for volume dial and headphone jack.

MORE: How to digitise your vinyl collection

The USB cable, which is also how you’ll supply the UFO202 with power (a green LED lets you know it’s connected), is hard-wired and is probably the most solid thing about the unit’s design.

It’s all brilliantly simple - and so is the process of recording to your computer. As is pretty much standard, there is no driver or other installation necessary: simply download some free recording software, such as Audacity, plug the UFO202 in and away you go.

There will be little to give the class leaders sweaty palms in terms of the Behringer’s performance - but what, really, can you expect from something cheaper than a pair of cinema tickets?

The presentation is lively and fun, and actually stays true to the company’s habit of wringing every last penny's-worth of performance from its investment in its products.

While predictably orbiting a different sun to our reference system, it’s not as if it’s singing from an entirely different hymn sheet nor understanding the music wildly differently – it just isn't doing it as well.

There isn’t a great amount of detail rvealed - the UFO202 settles for an up-front presentation heavy on midrange, rather than digging deep into textures or auxiliary lines. But these are always recognisably the broad strokes of songs, and the performance is not entirely bereft of dynamic range.

Organisation and timing are the UFO202’s main difficulties. Having such little a confined audio space in which to play leaves it with nowhere secure to place the strands it is digging out of the mix.

When a track is driven by its rhythms rather than its melody, the Behringer can often give a quite confused, muddled performance. It’s never so awry as to be wholly unlistenable - we’d just prefer to be listening through something else.

Being listenable is not the faintest of praise for a product of this price, either. Given only its spec sheet and cost, one might anticipate some coarseness and edge, or overly wobbly bass, but those aren’t maladies from which the UFO202 suffers.

It strikes a sensible balance that feels comfortable with even the most rudimentary of recordings.

if you want quality copies of your vinyl from a ripping phono stage, not to mention a component that will sit within your system comfortably for day-to-day playback, we’d suggest spending more. But there are certainly circumstances in which we can see this Behringer coming into its own.

Anything spoken, for example – old interviews, voice recordings, dramas, comedy shows and the like – will not suffer the same way as a musical performance.

To recommend it as a cheaper alternative to something like Rega’s Fono Mini A2D, though, would be dishonest. With the UFO202, you get exactly what you pay for - but, at least, you're getting your money's-worth.