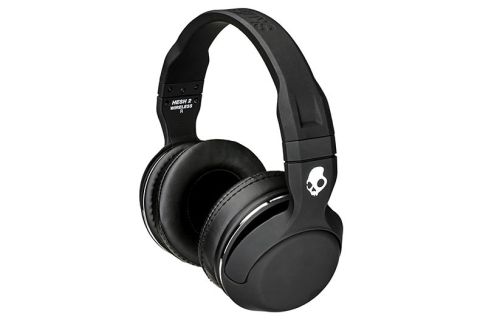 They sound large enough, but they’re also soft, slow and lacking in detail

Those who are after stylish headphones and who have plenty to spend might end up with a pair of Beats Solo 2 Wireless. But not everyone has £200 lying about, even those who fork out £500 a year or more for their phone contract.

The Skullcandy Hesh 2 Wireless are one of the leading budget alternatives. Selling for as little as £50 they’re very cheap for a pair of full-size wireless headphones. They won’t please those who are picky about sound, though.

These are large and chunky, and like most Skullcandy headphones you can get the Hesh 2 Wireless in a few different colours, if not the massive library the wired version offers. Yet.

These are all-plastic headphones. As with any pair this affordable, even the leather is made of plastic. They have large fake leather pads.

They look like real head-huggers but are actually a little less comfortable than you might assume. As the earpad shape is almost perfectly round, parts of the pads may rest on your ears rather than around them, which isn’t ideal.

Add mid-to-firm headband pressure and pads that aren’t as soft as some and the Skullcandy Hesh 2 Wireless end up a little less comfortable than they appear.

The real highlight of the Skullcandy Hesh 2 Wireless is that they have Bluetooth wireless connectivity. but cost only as much as a pair of entry-level wired, full-size headphones.

We may not love them, but their current price is extremely aggressive.

The battery lasts for up to 15 hours of playback, there’s an inbuilt mic for calls and chunky buttons on one earcup let you alter the volume.

We’ve had mixed experiences with wireless performance, with it working perfectly in an area of little wireless interference, but misbehaving in an office full of tech. Still, they do seem more reliable than some no-brand wireless pairs.

An included cable lets you use this Hesh pair wired too, should you run out of battery or find the Bluetooth starts playing up.

The Skullcandy Hesh 2 Wireless sound is undemanding – smooth to the point of melting.

It’s about as far from harsh or sibilant and it can get, and as you might hope, the full-size design and larger drivers deliver sound of satisfying scale.

Skullcandy says it uses Supreme Sound tech designed for “powerful bass, warm, natural vocals, and precision highs” and we can agree with at least some of this. The bass is inflated and the sound very warm.

Plenty of people will be happy with the Skullcandy Hesh 2 Wireless, but they’re not the kind of headphones we’re after.

All edges are softened off in both the midrange and treble, leading to fairly poor detail recovery and all-round unchallenging and uninsightful sound.

You’re only going to have a superficial relationship with music through the Skullcandy Hesh 2 Wireless.

As is often the case with Skullcandy headphones, the bass is not well controlled either. It’s prone to boominess and its slow reactions mean the Skullcandy Hesh 2 Wireless are rhythmically fairly inept.

These headphones have a big canvas, but what’s painted on it is fairly vague. For very casual listening, if for example you want a backup wireless headphone to use in the gym, the Skullcandy Hesh 2 Wireless are up to the task.

You can pay an awful lot more than this for an only mid-grade wireless pair, after all. Just keep your sound-quality expectations in check.

They are among the cheapest full-size wireless headphones you’ll find on the high street, not least because they tend to sell for well under their recommended price.

If you can afford it, it’s worth spending the extra on the Philips SHB8850NCs or AKG Y50BTs, though.

The Skullcandy Hesh 2 Wireless sound large enough, but as they’re also soft, slow and lacking in detail, we wouldn’t recommend them as an everyday-use pair.

See all our Skullcandy reviews