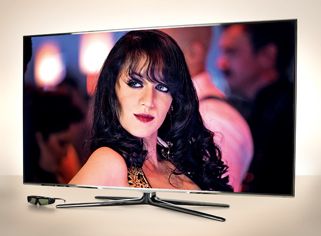 A show-stopper on the looks front, but its performance can’t really justify the price

The Samsung UE60D8000 is a glamourpuss of a TV. This 60inch screen is barely 3cm deep and is wrapped in a bezel less than 5mm wide – it’s as frameless as you’re going to get at any screen-size, never mind at the monstrous end of the market.

Samsung likes to give its top-of-the-range sets a more stylish remote control, and first impressions are excellent. The brushed finish, large, soft-touch buttons and white backlight are lovely, but the D-pad used to navigate the on-screen menus isn’t backlit, nor is it raised enough to differentiate itself.

This makes for a frustrating experience if you’re trying to navigate or calibrate one of the set’s four HDMI inputs in the dark.

Fiddly setup but worth the time
Although the menus are bold, with helpful descriptions, there are a few to navigate – and the D8000 requires the kind of exploration skills of which Sir Ranulph Fiennes would be proud.

The trickiest part of calibration is in nailing the motion processing. We set the blur and judder-reduction settings to level 6 for the best grip and smoothness.

The opening Chapter to the Blu-ray of Willy Wonka And The Chocolate Factory (the 1971 Gene Wilder one) is a great test of motion, believe it or not, with confectionary coming at you from all angles.

The Samsung struggles to keep movement super-smooth, but it’s not alone in this. The edge-lit LED backlight isn’t even, and intrudes ever so slightly into the corners of the picture.

Otherwise, black levels are pretty impressive, with decent depth. Spin the Blu-ray of X-Men: The Last Stand, and the UE60D8000 shows it’s a talented edge-definer. The characters’ uniforms are sharply defined, while the texture of the materials used is presented convincingly.

Improvement in 3D performance
Switch to 3D content and there’s a noticeable improvement compared with last year’s models, especially where crosstalk is concerned. Fast-movement loses a little cohesion, but it’s still a more watchable image through the lightweight 3D glasses.

The TV does a great job of keeping skin-tones natural while producing, bright,
punchy and vivid hues when required. The Samsung does a good job of blowing up standard-definition fare to meet its resolution and screen size, too.

Motion is a bigger issue here than with Blu-ray although the switch to a high-definition station makes the screen more at ease.

You’ll find a similar suite of features and online functionality accessed through the Smart Hub as you find on the Samsung PS59D6900 plasma, so there’s plenty to investigate via either a wired connection or through the integrated wi-fi connection – including services such as Skype (for free video calling), YouTube, Facebook, LoveFilm and more.

Given its looks, the Samsung won’t be short of admirers, but you can buy a lot of TV for this kind of money – and the picture quality needs to be on another level to justify anything better than a four-star rating.