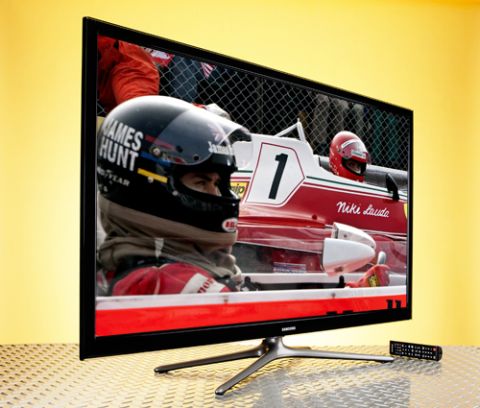 Best budget 47in-52, Awards 2013. This is a superb all-rounder, which combines fantastic picture quality with a strong feature set, all at a competitive price

With everything the Samsung PS51F5500 plasma TV has to offer for £700, it’s hard to think of it as anything other than a bargain. Even without its reasonable price tag, this is a really great TV – but factor that in and it becomes a truly excellent one.

The Samsung PS51F5500 is unlikely to win any awards for style, with its thick, plasticky bezel and chunky plasma design looking dated compared with the skinny silhouettes and barely there bezels of 2013’s LCD screens. Don’t let that put you off too much, though – it’s far from ugly.

Do take care if you’re looking to wall mount this TV, though: some backwards-facing ports further scupper its chances. These include both the ethernet port (though there is wi-fi built-in) and the aerial input.

The three HDMI sockets and two USBs are side mounted. There’s no satellite input for Sky or Freesat users.

Samsung’s Smart Hub is easily the most innovative and fully featured out there at the moment, and it’s of course included on the PS51F5500 just as it is on its £2000+ flagship Samsung TVs.

Netflix, BlinkBox and LoveFilm are all included, as is the full roster of UK catch up services – this fact is currently a Samsung exclusive, and a very useful one at that.

Not only that, but we were delighted to find Samsung’s 2013 smart remote included with this set too – Panasonic and LG left theirs out at this price point. It offers pared-back controls, easier smart menu navigation and voice commands.

A word of warning about the cool-sounding voice control function: if it’s possible, it seems to be even more flaky than we found on the Samsung F8000. We feel it’s best avoided if you want to keep your sanity.

Voice commands aside, the Smart Hub is, on the whole, as nice to use and navigate as on the more expensive Samsung TV sets.

It does feel a little sluggish in places, loading programmes and menus that little bit slower than we’ve seen higher up the range, but we’ll put that down to the dual-core processor at work here in place of the F8000’s quad-core one. It’s a not unreasonable compromise at this price.

So how does it perform? As we said at the top, this is a very good television. Black levels are seriously impressive and outdo more expensive TVs, clinging on to plenty of shadow detail even in the tough to cope with murkier scenes of Sucker Punch, for example.

It has an incredibly natural handling of colour too, with an impressive sense of depth and tonal subtlety. Skin tones look realistic and believable, but throw some more dynamic colours into the mix, and the Samsung isn’t afraid to put some punch behind them either.

There’s stacks of detail on offer, with crisp outlines that don’t look overdone. Objects and landscapes have a real depth to them and there’s great, natural contrast levels.

Admittedly, bright whites don’t pack quite as much punch as they do on some rivals – if there’s one area for the Samsung to improve on, this would be it.

Throw standard def content from the Freeview HD tuner its way and the Samsung isn’t quite the success it is in HD, with its upscaling falling a little short of that offered on some rival sets. It’s perfectly watchable, of course, but this set certainly thrives on HD content when at all possible.

Despite the PS51F5500’s bargain price, active 3D is included – and you get two pairs of glasses in the box, so you’re kitted out from the get go.

With just minor motion processing turned on, we experienced next to no judder in 2D or 3D, and an all round stable 3D performance that can give more-expensive sets a run for their money.

The Samsung gets another pat on the back for its sound performance. It’s an impressively wide soundfield, with a decent weight that prevents it from coming across too thin or flat.

Vocals have plenty of texture and explosions sound solid enough that you could hold out from upgrading to a speaker package or a soundbar right away.

The Samsung PS51F5500 is a seriously good TV for a seriously good price. At £700 (or even less, if you shop around), you get features and a performance that could worry its more expensive rivals.

One thing is for sure – at this price, you won’t find a 50-inch set much better than this.