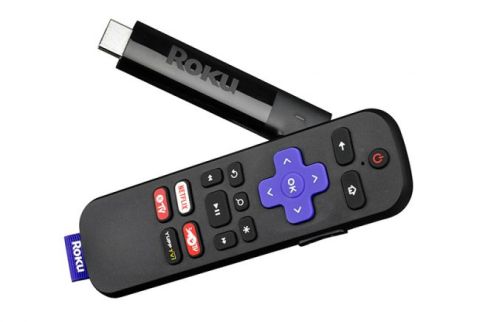 An excellent video streamer with a new, low price, but the Amazon Fire TV Stick 4K is better and even cheaper

For the company behind Sky’s hugely successful Now TV box, Roku has a low profile. Though a household name in the US, brand awareness in the UK doesn’t begin to come close to that of Amazon’s Fire TV or Google’s Chromecast.

The company’s first 4K streaming device (and still the only one available in the UK), the Streaming Stick+, combines the best bits of both and brings the company up to date with its competition. There are lingering doubts as to how much you really need a device of this type, but the Roku Streaming Stick+ gives several good reasons why you might.

The name is a giveaway, but the Streaming Stick+ is essentially a stick that streams. Like the Amazon Fire TV Stick 4K, it’s a dongle that plugs directly into your HDMI socket – though it is much slimmer and easier to accommodate than its competitor.

Unlike the Fire TV, there’s no HDMI extension cable in the box. You can order one free from Roku’s website, but that’s not ideal. The Stick+ is powered via your TV’s USB socket, making it more convenient than the Fire TV and Chromecast Ultra, which require mains power to run. There is also a plug included to run it from the mains.

It uses a mini-USB to USB connection, but the included cable is a little on the chunky side. That’s because it has a wireless amplifier built in to help increase wi-fi strength. It’s even more important here because unlike the Fire TV, there is no option to hard-wire via ethernet.

The small remote included in the box does all the basics for navigation and playback. It comes with four shortcut buttons too – one for Netflix and three somewhat random choices of YuppTV, Red Bull TV and Rakuten.

Setting up the Roku Streaming Stick+ is no trouble at all. Plug it in and an on-screen guide walks you through the process. Once the Roku is on your preferred wi-fi network, it will check your connection, as well as your display and HDMI port specifications to determine the video quality your set-up can receive.

Pick an HDCP2.2-certified HDMI 2.0 input and the Roku stick will support video all the way up to 4K at 60fps. Register your Streaming Stick+ on Roku’s website and from here, and you can select apps (or ‘channels’) to download to your device.

The Roku interface hasn’t changed much over the years, but it’s simple, clean, clear and has only a handful of menu options, the homescreen largely being dedicated to a grid of your chosen apps.

It’s a more objective approach to Amazon’s Fire TV, which pushes its own content throughout its interface. As the Roku is a neutral party, you’ll get the same experience whichever streaming apps you subscribe to.

However, some of the apps aren’t as up to date as you’ll find elsewhere. Amazon, for example, has a dated interface compared to the latest version on your smart TV. Spotify is similar, with more limited features than you’ll find elsewhere. It’s unclear if this is down to Roku or the app providers, but you get a better experience via Amazon’s Fire TV Stick 4K.

Menu options are kept brief, so alongside the standard search and settings options, there is also a ‘Channel Store’ and an option for ‘My Feed’. The Channel Store is the place to go for more apps, with thousands to choose from. There are over a hundred games to download too, but they are relatively simple compared to the richer gaming options offered by Amazon.

The ‘My Feed’ section is for inspiration on what to watch, with a selection of recent TV shows and movies that can be watched using your Roku stick.

Currently, the majority of streamed 4K content in the UK comes from Amazon, Netflix and YouTube, and the Streaming Stick+ gives you access to them all, alongside HDR support for HDR10.

You’ll also get access to the big catch-up services such as BBC iPlayer, ITV Player, All 4, and Demand 5, plus Sky content from the Sky Store and Now TV – something Amazon Fire TV doesn’t offer. This is one of the most comprehensive offerings out there, especially when you can cast to the Roku Streaming Stick+ too.

Start streaming Okja from Netflix in 4K HDR and there is a noticeable improvement in quality to the Full HD images on the Roku Express. The picture is crisp and detailed, with HDR on hand to make images more impactful. The scenes of Okja and Mija in the woods have green tones as rich as they are subtle, and a level of insight that creates a believable sense of depth.

Buffering is fast too. Loading times take a little longer than with the same content on our Samsung QE49Q7C, but buffering to its intended resolution is much quicker. Navigating the interface is similarly snappy, though the Amazon Fire TV Stick 4K probably just about pips it for out-and-out speed. We experience a few occasions when thumbnail graphics don’t load as we scroll through the Channel Store, taking a second to catch up.

For added functionality, you might want to consider downloading the Roku mobile app, which is free for iOS and Android. Not only does it give you a fresher, richer interface than the one on your TV, it also offers a basic voice search for looking up movies or actors. It’s no Alexa, but the option is there if you want it.

It also gives you the option to send photos, videos and music from your phone or tablet to the TV and a ‘private listening mode’ that sends the TV sound to a pair of headphones connected to your device. We notice some lag when using Bluetooth headphones, so would recommend a wired pair for the best experience.

There’s no doubt the Roku Streaming Stick+ is a great device and, thanks to a large selection of apps and a neutral approach, one of the best of its type.

Set-up is simple, it has an easy-to-use interface and is fast in use – the only remaining question is whether you really need one.

With many 4K smart TVs offering a good chunk of the stuff the Streaming Stick+ does, and in some cases (such as the Amazon app), doing a better job of it, the answer will depend on whether your TV can match the Roku’s extensive range of apps.

And even if you do decide that a 4K video streamer is something you need, the Amazon Fire TV Stick 4K is even cheaper, slicker, and has Dolby Vision on board.