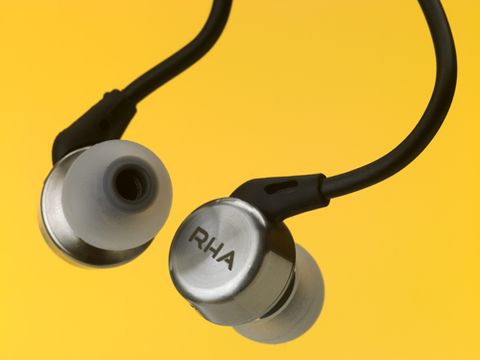 Earphones that look and sound like they mean business, but only if you run them in extensively

The RHA MA750is have a unique place in What Hi-Fi? Sound and Vision history as the Headphones that Take Their Time.

Seldom have we experienced such a transformation in sound quality be brought on by something as simple as a disproportionately long run-in.

We originally reviewed these earphones in the January issue of What Hi-Fi? Sound and Vision. After running them in for a full weekend – Friday to Monday, in fact, and usually more than enough for a set of in-ears – we awarded them two stars.

The overriding characteristic was harshness. An abundant treble wasn’t adequately balanced by the low-end, and the resulting sound was enough to make our reviewers wince.

And yes, we had tried the different sizes of ear tips. We stand by our original review of the product we received, which understandably upset the good folks at RHA.

We got another sample. These sounded similar, right out of the box as well as after another weekend of running-in.

Then we compared them with the originals, which had by now benefited from more use after the review had been written – and curiously the first set sounded better.

The sound had improved. They sounded more balanced. The treble wasn’t harsh, and there was a decent amount of bass.

This puzzled us. So, in the spirit of experimentation, we left the second (harsh-sounding) set playing for a whole week while we went away to cover CES 2014 in Nevada.

When we came back, their sound was wholly different. Now the sound quality is impressive.

It’s a rounded, tonally even sound. The treble is no longer overstated – it’s merely prominent. Leading edges on snare drums and high-hats are well defined but not hard.

There’s now plenty of bass – occasionally a little too much, in fact – which serves to solidify the presentation. There’s also an impressive level of clarity and fluidity to the sound.

How do they fare against the Award-winning Beyerdynamic MMX 101iEs? Much, much better than before. The improved sound of the RHAs closes the gap dramatically.

The Beyerdynamics still sound more dynamic to us, with greater subtlety to fine detail, but the RHAs now perform to a level that we’re happy to recommend them.

When it comes to design and presentation, these headphones are very impressive. The cable is thick and strong, with the plug end reinforced with a spring.

Elsewhere you get stainless steel parts, and a three-button inline remote/microphone for Apple iOS devices.

The earbuds are comfortable once you get them to fit, but this may prove awkward for some. They’re designed to go over the top of your ears, reinforced by hardened cables that prevent you from using them any other way.

We find it a bit fiddly and restrictive.

Accessories are generous: there’s a stainless-steel card holding nine pairs of ear tips of varying size and shape, including double-flange and foam varieties. There’s also a clothing clip and a zip-up wallet.

Our journey with the RHA MA750is has been a puzzling one. In-ear headphones just don’t normally need such an extensive running in.

The MA750is are the exception to prove that rule, it seems, and if you give them the time they need you’ll eventually have a fine pair of buds.