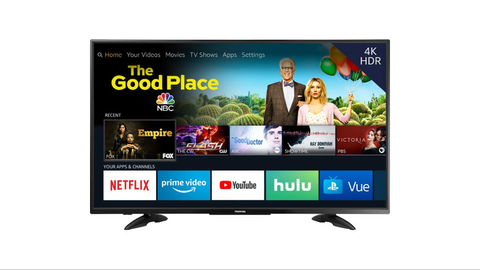 The Toshiba 55LF621U19 is the best Amazon-branded smart TV we've seen, but the mediocre hardware still weighs it down

However, the bottom line is that Amazon’s more-than-capable software is still hampered by the decision to place it in really cheap hardware. While the sub-$500 price point is a popular one with consumers, it brings with it several undeniable weaknesses that make the TV as a complete package tough to recommend.

As you’d probably expect at this price, the 55LF621U19's design is on the basic side, with a pretty chunky plastic cabinet and glossy black bezels.

They are joined by a pair of glossy black plastic crescent-shaped feet, which sit towards the center of the screen – stable but a little inelegant. We’d much prefer wider separate feet or a single central stand.

Connections for this TV aren’t too bad for a budget set. On the left hand side you’ll find the main set – three HDMI ports (one with ARC), one USB port, an optical digital port and a headphone out. They’re a little far from the edge to make them super easy to use, but they are still visible and accessible.

That’s not quite the same story for the additional ports – namely the RCA composite video inputs, an ethernet port and a screw-on coaxial connector for antenna and cable – which are all inset and face downwards. Thankfully, you’re likely to connect most of these once and leave them there, so it’s not too much of an inconvenience. Plus there’s built-in 802.11ac wi-fi.

One of the biggest talking points about this TV is Amazon's Fire TV OS, but despite a potentially promising experience, it is overly aggressive in its content recommendations and heavy handed with its advertising banners for Amazon Prime shows.

While many smart TV platforms include some form of advertising, usually of recommended content from preferred apps and services, Amazon's Fire TV also includes ads for Amazon merchandise.

This ranges from the obvious, such as movies and home theater gear, to the interest-specific, such as sports equipment and recommendations personalized to one's Amazon history. Sometimes, it can be a little weird, such as the time we turned on the Toshiba Amazon TV to be served an ad for the Samsung Q7F television.

It wouldn’t really be a Fire TV without Alexa built in, so of course the popular voice assistant is here, helping you to search for content, adjust settings on the TV and control any Alexa-compatible smart home devices.

The app selection here is pretty good, including popular apps such as Netflix and HBO Go. These are often promoted on the home screen, so easy to find and download, but anything else you’ll have to go looking for.

Apps are spread across 27 different categories, such as Movies & TV, News and Sports. There are literally thousands in total, but browsing them is hard due to slow load times and poor categorization. You’re better off searching by name, though that's also rather sluggish.

Quality control isn’t the best either – there are a lot of nonsense apps here that we can’t see appealing to anyone, and that you wouldn’t get on a properly curated app store.

The Toshiba remote that comes with this TV is pretty minimal and fairly lightweight, but not something that’s abnormally poor for the price point.

Unsurprisingly enough, it’s not dissimilar to Amazon’s Fire TV remotes. There’s a glossy ring in the center that functions as a four-way directional pad, and it’s surrounded with dedicated buttons for home, back, menu and media playback controls.

Along the bottom are four app-specific buttons, for Prime Video, Netflix, HBO and PlayStation Vue, and at the top there’s a remote button for accessing Alexa. This is especially handy when searching for content and apps, because it eliminates the need to mess around with the sluggish keyboard.

The Toshiba uses direct LED backlighting with no local dimming, which results in some expected downfalls that considerably affect picture performance.

For example, we notice shadowing in the corners of the screen when displaying solid colours, indistinct edges to bright objects and deficiencies in both light blooming and backlight consistency that are hard to ignore.

The unwanted blooming is unmissable in scenes from Blade Runner 2049, for example, with a halo of unwanted light surrounding a brightly lit doorway at the end of a dark hallway.

It's similarly noticeable in Spider-Man: Homecoming when a gang armed with alien weapons holds up a bank branch, their glowing, purple energy beams punctuating the action. While these beams should be well defined and impactful, a faint glow surrounds them instead, the result of the Toshiba's less precise backlighting.

At this price, it’s nice to see the Toshiba offering HDR support, with compatibility for HDR10 but not Dolby Vision. There’s no HDR10+ support either, which seems like a missed opportunity considering Amazon Prime Video is currently one of the few sources of HDR10+ content.

That said, what is on offer here performs well, and the HDR support provides excellent midtones, with plenty of subtle detail in shadowy and dimly lit scenes. It’s not perfect, but it’s still a significant step up in quality from standard dynamic range.

Viewing angles leave a lot to be desired though. You’ll find colour shifting at just 30 degrees off center, but vertical viewing angles are worse, with significant color issues when you’re stood up compared to sat down.

Color accuracy isn’t this TV’s strong point anyway. While colors manage to be rich and punchy, despite only middle-of-the-road brightness, they’re pretty inaccurate, and off-axis viewing makes this worse still.

There are dual 10-watt speakers with DTS sound on board here, but while they go loud, the quality of what they produce isn’t great.

Bass is non-existent due to a lack of subwoofer, but at the other end of the scale, treble is also muffled and indistinct. If you buy this TV, it's essential that you also add a soundbar.

The 55LF621U19 may offer a better picture than the original Westinghouse Fire Edition TV, but the improvements in picture quality — adding HDR support and improving the color accuracy — don't do enough to give this TV the nod.

As long as Amazon sticks to the more budget-tier TVs as the home for its Fire TV platform, it seems likely that they will continue to fall behind in the performance that we want from a TV we recommend.

And that’s a shame. Because for all the quirks the Fire TV platform has, it’s a solid performer. It’s just the hardware that lets it down.