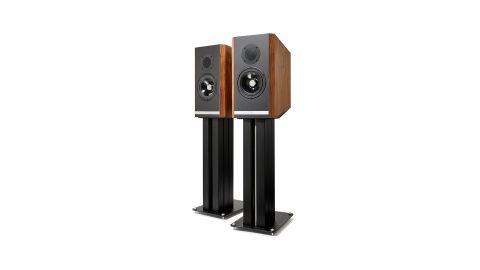 The Kudos Titan 505s are seriously impressive performers, but their uncompromising upfront attitude won’t appeal to all

The 505s are the baby speakers from Kudos's high-end Titan range. As a brand, Kudos isn’t about trying to please everyone. It makes characterful, single-minded products that eschew all-round mass appeal for something more individual.

But, for the right person, that focused approach makes them arguably an even more tempting proposition than more conventional offerings such as Sonus Faber's Electa Amator IIIs, Wilson Benesch's Precision P1.0s or KEF's Reference 1s, for example.

On the surface, this is yet another two-way standmounter, but there’s a lot more going on with the 505 than that basic description would suggest. Both the 29mm dome tweeter and 18cm mid/bass unit are unique to Kudos. OEM giants SEAS make these drivers to Kudos’s precise requirements, and that means you won’t find them on anyone else’s speakers.

The tweeter uses the motor system of SEAS’s Beryllium dome tweeter but swaps that hard dome for one made of Sonomex fabric. As expected from a high-end tweeter, the rest of the design follows all the current design trends.

It uses a powerful Neodymium magnet with shorting rings to reduce distortions, as well as having venting behind the dome to help dynamics and control. There’s also a slight horn-loading effect from the 7mm thick aluminium front plate.

The mid/bass driver uses a double-coated paper cone with a large 39mm voice coil (for good power handling) and distinctive aluminium phase plug at the centre. Its motor system is designed to allow long excursions for the cone with minimal distortion, and the chassis is claimed to be rigid and low-resonance to give a good foundation for the cone to work from.

As is common now, that chassis is also designed to be as open as possible to reduce sound reflections, cavity resonances and air flow noise.

The Titan 505s are no ordinary two-ways though. There are two of these mid/bass units in each cabinet, positioned back-to-back and operating in an isobaric arrangement.

This kind of configuration has advantages in terms of getting more bass out of a given cabinet volume, but is rarely seen due to complexity, cost and the difficulty in optimising the sound. Even so, we’ve heard great results from this arrangement when it’s done properly.

The three drive units are linked with a minimalist, low order crossover – electrically, it’s first order for the mid/bass and second order for the tweeter. The crossover is wired point-to-point rather than using a PCB (printed circuit board) as most others do. Ease of manufacture and consistency are PCB advantages, but Kudos is willing to forgo these for what it perceives to be performance advantages.

At this level, it comes as no surprise that Kudos uses some tasty audiophile components for this network. Mundorf supplies the air-core inductors and resistor, while a high voltage ClarityCap film type capacitor is used in the high-frequency filter.

On the 505s’ back panel, above the conventional single-wire terminals, there are a series of links that make it possible to convert the speakers to fully active operation.

Of course, you’ll need to buy a dedicated active crossover – the likes of Linn, Naim and Devialet can help in this respect – and add four channels of power amplification, but it does open up an intriguing and potentially excellent upgrade path. This is something that none of the rivals we’ve mentioned offer.

You’d think the cabinet would just be a simple rigid wooden box, but even here Kudos has chosen to do something more elaborate. It’s actually a complex construction that makes use of HDF (High Density Fibreboard) of differing thicknesses to spread resonances.

The 505s’ external side panels are secondary and attached to the inner enclosure at specific points with a polyethylene gasket in between. The idea is to control and dissipate the vibrations generated in cabinet without harming the sound.

It’s a solid-feeling cabinet, no doubt helped by the extra structural reinforcement supplied by the baffle holding the inner (hidden) mid/bass unit.  There’s a discreet port firing out the rear to help to tune the low frequencies.

There are five finish options for the box – walnut, Tineo, red Tineo, black oak and satin white. The quality of finish on our review samples is as good as we would expect for the price, though perhaps it lacks the luxury aura of the Sonus Fabers in particular.

The performance of any standmounters depends heavily on the support they’re placed on, and the Titans are no different. We’re pleased to report that Kudos offers dedicated stands. These aren’t cheap at £750, but they are solid and rigid.

The speakers bolt onto these for a really secure interface. There’s no messing around with something as vague as Blu-Tack here.

The best position for the Titans depends on the room and partnering system. In our set-up, we end up with the speakers into the room and firing pretty much straight ahead. We started with them pointing towards the listening position, but they were a little tonally bright and the stereo imaging lacking in openness when used this way.

Any speakers at this level positively demand high-quality sources and amplification. We use our usual reference system for most of this test – that’s Burmester’s 088/911 Mk3 pre/power with Naim’s ND555/555 PS DR music streamer and the SL1000-R record player providing the signal. We also have Nagra’s lovely Classic preamp and Naim’s excellent SuperNait 3 integrated amp on hand for some variety.

Once up and running, there’s no denying the Titan 505s’ talents. They’re impressively fast and forthright, sounding as confident as they come. Play Neneh Cherry’s Broken Politics and the Kudoses deliver the sparse production and complex rhythms with admirable confidence.

These speakers are punchy and immensely detailed, particularly through the midrange where Cherry’s distinctive vocals are laid bare. We can’t recall a rival that’s as insightful as the 505s when it comes to conveying the dynamic nuances and texture of a voice. This says much for the quality of the drive units and calibration of the crossover network.

At just 45cm tall, they aren’t big, but the combination of the isobaric arrangement, solid cabinet and careful port tuning results in articulate and tuneful lows. There’s a good amount of weight and authority to the bass too, but not to the degree where we would be fooled into thinking we were listening to something significantly larger.

We switch to Holst’s The Planets and the Kudos respond with a bold, upfront sound. It’s an exciting presentation, one that hits hard and digs deep into the fabric of the recording for information. We’re impressed by the speaker’s composure at higher volumes and by their sense of control. They never seem rushed or stressed.

Once care is taken with positioning, the Titan’s stereo imaging is nicely out-of-the-box and precise. There’s not quite the spaciousness, scale or sound stage depth of some rivals, but when a sound is so full of energy and drama these things are relatively easy to overlook.

What we find harder to ignore is that things turn a little lifeless at lower volumes. These are speakers that sound happiest when pushed, which is fine for some of the time. But most people will have to listen at quieter levels sometimes, and it’s then that the 505s lose a bit of drama.

For all their resolution and impressive cohesion, these boxes also lack a little natural warmth. Tonally they err on the lean side, but match with a bit of care and this shouldn’t be an issue.

Finally, that upfront presentation can be exciting, but when we listen to understated music, such as Found Songs by Olafur Arnalds or Melody Gardot’s The Absence, we crave a more relaxed and refined approach to music replay. The Titan 505s want to make everything sound energetic, but not all music is meant to be that way.

If you like what these standmounters set out to do, we doubt whether you’ll find preferable alternatives. When it comes to delivering a direct, agile and punchy sound the 505s are excellent. We just wish they had a broader spread of talents to appeal to the rest of us.