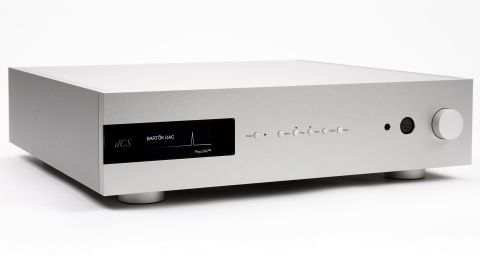 The Bartók is well-equipped and superbly made, but most importantly, it sounds great

Why does it cost so much? That’s a perfectly fair question to ask of a product that costs as much as dCS’s Bartók streaming DAC does.

The simple answer is that it’s a product of a small high-end digital specialist that refuses to cut corners when it comes to engineering and build. Economies of scale aren’t on the Bartók’s side either.

Yet it remains the cheapest way to get a digital-to-analogue converter with a dCS nameplate. The next model up, the Rossini DAC, costs significantly more and lacks the option of a dedicated headphone amplifier.

When it comes to digital-to-analogue conversion the brand sits at the top table. It has quite some pedigree, pioneering high-resolution conversion in the late-1990s and implementing DSD capabilities in its products early on.

From the beginning dCS has refused to do things the easy way, so rather than buy off-the-shelf DAC chips from large OEM suppliers such as Burr Brown, it chose to develop its own converter technology called the Ring DAC.

This uses a combination of FPGAs (Field Programmable Gate Arrays), an innovative circuit topology and sophisticated in-house software to deliver number-crunching capabilities the company feels are way beyond those available from bought-in alternatives.

Developing the software in-house means that performance and features can be upgraded as and when possible. It’s a big advantage over most rivals who are restricted by what their OEM supplier does.

The Bartók also packs a UPnP streaming module, which means it can play music across a home network and access streaming music services such as Tidal, Qobuz, Deezer and Spotify Connect. Internet radio is on the menu, as are Apple Airplay and Roon compatibility. It’s all controlled through the company’s dedicated and relatively slick Mosaic software app for iOS and Android.

Other products in dCS’s range already cover much of the same engineering ground, albeit at higher price points. However, the option of adding a dedicated headphone amplifier marks the Bartók out from the rest. Delete the headphone option and the standard unit costs £11,499 ($13,500, AU$18,995).

As we’d expect, the headphone circuit is no afterthought. It has been carefully developed from the ground up to work with a wide range of headphones and deliver plenty of drive with low distortion.

Look on the front panel and you’ll find a conventional 6.3mm socket and a 4-pin balanced XLR for headphones with such an option. If yours allow it, we’d choose to take the balanced route, as it gives slightly cleaner and more focused results.

Overall, the Bartók’s connectivity is good. There are seven digital inputs: a USB (type B), optical and co-ax (RCA and BNC) alongside two AES/EBUs and a USB (Type A) for playing music files stored on a flash drive. The network connection is through an ethernet cable only; there’s no wi-fi here. That’s a bit of a surprise, but not a deal-breaker as we always recommend hardwiring on stability grounds.

There are no analogue inputs, so the volume control equipped Bartók can’t be used as a preamp in a mixed analogue/digital system. There are analogue outputs of course, in the form of stereo RCAs and balanced XLRs.

You also have the option of connecting to an outboard master clock. Every digital product has a clock built-in and it’s how all the parts of the digital circuit synchronise. The more accurate the clock is, the better the performance will be.

The master clock built into the Bartók is really good (obviously, given the price), but in our experience, if you add a top-quality external unit such as the ones that dCS makes, sound quality takes a leap forward. Such clocks cost thousands though, so it’s not a cheap upgrade and certainly not essential to enjoy this product.

The Bartók is a configurable unit. Go through the menus and there’s plenty that can be adjusted from the output level (0.2V to 6V) to the digital filter and buffer settings. All this is done using the rather small but crisp display and front panel control buttons, or more preferably through the Mosaic app.

The company has gone to town on digital filter options. There are six for PCM streams below a 176.4kHz sampling rate and Filters 5 and 6 swap to alternate settings for source data rates from there upwards. There’s also a dedicated MQA filter and a further four specifically to make the most of DSD files.

While we appreciate that some people like to tweak their hi-fi, we can’t help but feel dCS has overdone things here to the point where it all becomes a little off-putting. The differences between the various settings aren’t massive and would be hard to hear unless your system has a high level of transparency. It’s important to note that there’s no right or wrong answer here. The choice comes down to taste and partnering system.

For the record, we tend to prefer Filter 4 for PCM signals – it prioritises transient behaviour above filtering severity – only edging towards Filter 2 (a less extreme version of Filter 4) for listening to certain classic and jazz music. The default choice, Filter 1, gives the best measurement results but sounds too mechanical for our tastes. When it comes to DSD the standard Filter 1 option suits us best.

The Bartók positively demands a top-class system. We use our reference Naim ND555/555 PS DR music streamer as a digital source alongside a MacBook Pro loaded with Audirvana music playing software (and lots of hi-res music files). The rest of our set-up consists of Burmester’s 088/911 Mk3 amplifier pairing powering ATC’s SCM50 speakers. All cables are premium offerings from Chord Cables and Vertere Acoustics. We have two NAS (Network Attached Storage) units on our network – a Naim Uniti Core and Melco’s N 100.

We start by using the Bartók as a music streamer and it turns out to be a highly capable performer. With the partnering Mosaic app, it avoids the clunky feel of some rivals. The results are impressive whether we play music from one of our NAS units, use Tidal or through Airplay. There’s more than enough sonic transparency to make any qualitative differences between the signal feeds obvious.

Transparency is the word we keep coming back to. The Bartók produces a deeply analytical sound, one that’s brimming with detail and presented in an unvarnished way. If the source material is poor, you’ll know all about it because there’s no embellishment going on here.

Given a good recording such as Eric Bibb and Needed Time’s Good Stuff, this unit sounds wonderfully stable and focused. It has an impressive sense of control that doesn’t diminish even when things get difficult. The Bartók never sounds stressed, and that in turn allows the listener to relax and simply enjoy the experience.

It is superb with voices, rendering Eric Bibb’s rich vocals with the texture and subtlety they deserve. The Bartók doesn’t shortchange on the emotion front delivering songs such as Where The Grass Goes Green with simmering passion fully intact.

We move to Massive Attack’s Heligoland and the dCS continues to impress. We expect excellent insight into the album’s dense production and get it. Every instrumental strand is treated with care and it’s easy to track a particular sound or instrument even when the production gets busy.

It’s a pristine presentation built on clarity and precision, but that doesn’t mean that the Bartók doesn’t know how to have fun. Play Paradise Circus and the dCS proves surefooted rhythmically and pounds out deep bass with authority. These low notes are lovely and packed with power, weight and agility.

A listen to Stravinsky’s The Rite Of Spring highlights the dCS’s excellent stereo imaging. It renders an impressively expansive soundstage and populates it with convincingly layered instruments that never waver from their placement. We love the way it handles this piece’s wide-ranging dynamic swings and the punch mustered on the crescendos. The listening experience is truly thrilling with a recording such as this.

There’s little to criticise when it comes to tonality. The Bartók, as with other dCS products we’ve heard, is about as neutral as they come. No part of the frequency spectrum is emphasised and it all sounds in balance. Yet, in a well-matched system, the presentation still avoids sounding bland and sterile, which is a neat trick.

We try the digital inputs and aren’t surprised to find that the Bartók makes for a terrific standalone DAC. All the impressive qualities we note when using the streaming module are present and accounted for here. It’s a hugely capable number cruncher and is easily among the best available on the market anywhere near this level. The DAC’s insight, dynamics and refinement are straight out of the top drawer.

It’s not unusual to find a DAC with a volume control. Such a unit can be connected directly into a power amp or active speakers and that appeals to us. It reduces the box count and potentially saves money because you no longer need a dedicated preamp or another set of interconnects. Perhaps most importantly, there’s the promise of a better performance because of the purer signal path.

In our experience, that promise isn’t always kept because the output stages built into most DACs simply aren’t good enough. You’ll probably get a better sense of clarity, but the sound will usually lack in solidity and drive compared to a dedicated preamp. The Bartók is one of the few cases where things don’t feel compromised. You can still do better with a dedicated preamp but something good enough will probably cost you at least as much as the dCS.

Our review sample has the optional headphone amp fitted. The engineers at dCS have tried hard to come up with a circuit that works well across a wide range of headphones, and it does. We’re pleased to report that it’s excellent, retaining the character we so admire from the line output. There’s even adjustable gain to accommodate cans with differing sensitivities. We try Focal’s Stellia (with the balanced connection), Grado’s RS1s and the Beyerdynamic T1s without issue.

While the Bartók is very much an entry-level product in dCS terms, it packs a full dose of the company’s proprietary technologies into its well-built aluminium casework. It’s well specified and nice to use and, most importantly, one of the best sounding digital sources we’ve heard at this level. Recommended? You bet.