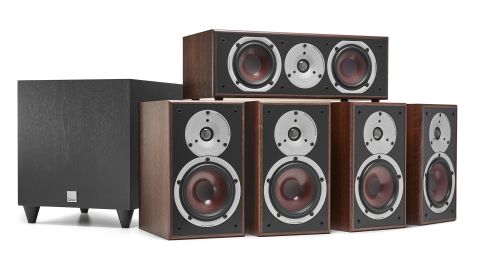 At the risk of comparing the Dali Spektor 2 5.1 to a hapless Scooby Doo villain, this speaker package would have won a What Hi-Fi? Award this year if it hadn’t been for that pesky Q Acoustics 3010i 5.1 Cinema Pack.

When you consider the Dali set-up incorporates two pairs of Spektor 2 standmount speakers, now back-to-back Award winners in their own right, the fact this system was a whisker away from the title should hardly come as a surprise.

On the face of it, those diminutive standmounters have all we’d expect from a typical £200 box, from the two-way driver configuration and ported bass tuning, right the way through to the 25mm dome tweeter and 13cm mid/bass driver. But partner them with an amp muscular enough to give them a bit of power to feed on, and their articulate, expressive performance is anything but ordinary.

So what has Dali provided to complement them in this package? Between the front channels sits its Spektor Vokal centre speaker, featuring that same 25mm soft dome tweeter sandwiched between a pair of marginally smaller 12cm woofers. Similarly slender and sleek in appearance, aesthetically at least it looks to be a worthy match.

All five tweeters are uniform, based on an ultra-lightweight weaved fabric, which Dali claims weighs less than half of the market standard. The woofers are a mix of low-mass paper cones reinforced with wood fibres, giving the driver an uneven surface that minimises resonance as well as offering that rustic appearance of which we’re so fond.

The size of those Spektor 2s and Spektor Vokal is undeniably a bonus, especially for those with little room to accommodate a class-leading speaker package. However, it does mean that the subwoofer has its work cut out to provide detailed and articulate low-end response with plenty of heft. Those duties fall upon the Sub C-8 D.

The sub houses a 20cm driver accompanied by an auxiliary reflex port, both firing into the ground, and is powered by 170W of Class D amplification. Dali’s description of the Sub C-8 D being ‘no boombox’ gives us confidence we’re about to get plenty of detail and speedy response as well as that called-for muscle.

Our immediate impression of this 5.1 suite is comparable with the first moments spent with the Spektor 2s a few years ago; it is a fast, detailed and gratifyingly entertaining listen from the off.

The sub offers scale to grander musical arrangements and intense action scenes, but don’t imagine the quintet of Spektor speakers is lacking in response with those lower frequencies.

There is plenty of weight and warmth to voices, giving dialogue a human element as well as keeping pace and delivering expression. It’s a balance that feels natural and unfussy, with rich treble. Snappy timing is still an eye-opener though. As we’re enveloped in an impressively spacious soundstage, effects flit from one side of the room to the other at pace, facilitating a true surround experience. The use of four Spektor 2 speakers as front and surround channels helps the familial character around the room, but the Spektor Vokal feels just as at home among its Award-winning brethren.

In fact, the only reason this package is not outright class-leaders is due to Q Acoustics’s ridiculously good centre speaker.

The Spektor Vokal is by no means lacking for expression, but Q Acoustics simply knocks it out the park. Given so much dialogue is focused here, it’s centre speaker’s role is vitally important, and the added dynamic control from Dali’s main rival moves it ahead in the pecking order.

But don't let this detract from what is a stunning performance by the Spektor 2 5.1. It's evidently deserving of all five stars within moments of plugging it in.

If you’re looking for a product consummately better, your budget would need stretch far beyond the price of these Dalis. But they remain speakers with which we could live for a long and happy time.