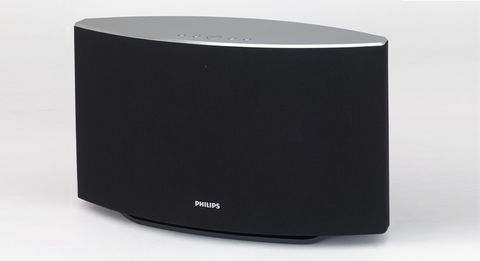 Aside from limited compatibility, its primary downfall is flawed performance

At face value the Philips SW750M may seem like a tempting multiroom option – for Spotify Premium users at least. The speaker can play music solely from Spotify through the streaming service’s Connect feature, only available to subscribers of the £10-per-month option.

Essentially, Connect lets you stream the service’s 30 million-song catalogue to the speaker over a shared wi-fi connection, using its app as a remote control.

The Philips doesn’t have Bluetooth or any physical inputs, so non-subscribers or those that listen to music from other sources too will want to look elsewhere.

There aren’t many brands pitching wireless multiroom speakers around the £100 mark (Sonos starts its offering at £170), so it’s pretty remarkable that Philips has two in its new range: the smaller version of this speaker, the SW700M, is an even more eye-catching £90.

One speaker can be used on its own, or grouped with up to three others (of any combination in the Philips’ range) to take advantage of its multiroom functionality.

Getting started couldn’t be easier; the simple set-up process via Philips’ SpeakerSet app (free, iOS and Android) gets you up and running in a few minutes. The app then lets you control speaker grouping, adjust equalization and update software.

Spotify’s app (extensively available across Windows, Android, iOS and even Blackberry platforms) will be your go-to controller for the most part, though; for those unfamiliar with it, its attractive and intuitive interface is easy to get along with.

If a smartphone is your device of choice you can still make or take calls and watch videos during playback as music streaming runs in the background.

What you can’t do is stream files stored on another device, so any songs not on Spotify’s database aren’t playable through the speaker.

While the Philips is hardly versatile when it comes to features, its physical design is more so. Despite the twin rear-firing bass ports, its happy close to a wall or in the middle of a table, and sits sturdily on its attached cradling stand.

All it asks for is a flat surface. Looks are nothing fancy, but the all-the-rage curves and stylish clothed front casts it a point or two above its price.

Visually, nothing gives away the fact that its shell is mostly made of plastic, and attractive aesthetics extend to the shiny-silver oval top panel – home to basic playback buttons, handy if your portable device is out of reach. The only other buttons (necessary for initial set-up) are around the back between the ports.

If you’ve already cast your eyes to the star rating, you’ll know there’s a catch: poor performance. At this price, the benchmark is set by Cambridge Audio’s cheaper Go (our Award-winner), and plonked next to the SW750M it’s easy to see why.

Both stream over a reasonably low bitrate but, fed the same material, the Go is a much more enjoyable listen. The Philips’ lack of body and richness in comparison is immediately clear, and it’s only a few songs in that we realise insight comes up short, too.

Select Barbara Streisand’s Don’t Rain On My Parade and while the Philips serves up a fair amount of detail in her vocals, the Go better expresses the dynamics and subtle accents in the theatrical delivery.

Supertramp’s The Logical Song is a good track for showing off a piece of kit’s drive and musicality, but here it only reveals the Philips’ lack of killer instinct; it politely ambles along, going through the motions without much in the way of punch or attack.

We’d like the bouncy keyboards to have more life about them, and the lead edge of notes more impact. It’s not all bad news: the Philips’ presentation is pleasingly open and big enough happily to fill a medium-sized living room, which can’t be said for many wireless speakers at this price.

It isn’t troubled by higher volumes, either, so might not make a bad sidekick for a party. Bass has decent weight, and there’s enough of it to make a table underneath it shake as that chunky bassline in The Ying Yang Twins’ Dangerous kicks in.

Clean and fairly well detailed, too, the soundstage gives instruments stacks of space to work in – even if the SW750M’s less-than-perfect organisation means they don’t all tie together as coherently as they should.

There’s no doubting that Spotify Connect is a worthy feature on a wireless speaker's spec sheet, but with competition getting more feature-packed by the minute to keep up with the ever-growing number of sources and platforms out there, we find the Philips’ narrow-minded attitude a little odd.

If the sound quality were good enough, users would jump at the chance to bag a multiroom speaker at this price. Unfortunately for the SW750M, its performance is not competitive enough to capitalise on any favourable first impressions created by its affordability, multiroom functionality or stylish design.