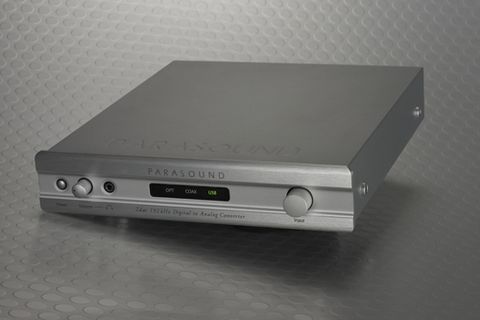 Not the final word in DAC performance at this price, but the Zdac still produces a lively, likeable sound

The half-width look is functional rather then funky, but despite its rather drab appearance, the Zdac boasts solid enough build quality for a £500 unit.

The front panel has an attractive brushed metal finish. The volume dial for the headphone output is solid and has a nice weighting and resistance to it.

The input selector dial on the right emits a solid clunk with every turn, but this action feels a little coarse and lacks refinement.

It’s quite obvious from small, slim display which inputs the Parasound has to offer: optical, coaxial and USB. There’s one of each, in addition to a set of balanced and unbalanced analogue outputs.

The asynchronous USB accepts all sample rates up to and including 24-bit/96kHz, while the optical and coaxial can both cater for higher-quality 24-bit/192kHz tracks. You don’t need to worry about downloading any drivers for your Windows PC – the Zdac works straight out of the box.

As with many rival DACs, Parasound sees jitter as the main enemy when it comes to music playback. So to try to help eliminate any problems it claims to use a unique re-clocking system to control the flow of the digital data.

Other measures taken to improve sound quality include the use of a linear power supply instead of a switch-mode mode to try and reduce noise.

Spin Daft Punk’s Get Lucky and the framework of the track is held together tidily. There’s a welcome agility to the track with good extension in the bass and decent dynamics.The detailed guitar rift sounds suitably funky and punchy.

The Zdac holds all the different elements together and the message of the music doesn’t get lost during the translation from digital to analogue.

The only real down side to the Zdac is that it tarnishes music with a slightly processed sound. This sheen is more noticeable across the midrange and treble, and results in tracks sounding more unnatural the higher you go up the frequency range.

With Get Lucky, the zingy guitar play, sparkly highs and Pharrell’s vocal don’t quite have the same smooth resonance as it does when heard through some rivals such as the Award-winning Arcam irDAC.

This minor niggle apart, the Parasound produces an entertaining sound. The Zdac may not be the coolest kid in class but, with its features and the sound it conveys, it’s one of the smarter ones.