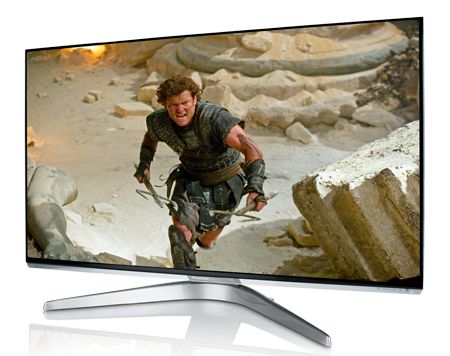 Stylish, with real areas of expertise – but the WT50 is up against strong rivals

The Panasonic TX-L47WT50 looks every inch the premium product. It’s vanishingly slim (just 2.7cm), features a clear surround that makes an already-minimal bezel look briefer still, and sits on a stand so stylised it almost needs its own review.

It also has some spec goodies to differentiate itself from its more affordable sibling. There’s a Freesat tuner alongside Freeview HD, for example, and the ‘backlight scanning’ motion processing operates at a giddy 1600Hz.

There are a couple of ‘pro’, ISF-approved picture modes, and two pairs of Panasonic’s comfortable active-shutter 3D glasses bundled in too.

Apart from an additional, dinky little touch-pad remote control (which would be perfect if its back was rubberised), the TX-L47WT50 shares the same common-sense ergonomics as the more affordable Panasonic TX-L47ET50.

As a 3D display the Panasonic TX-L47WT50 falls into the ‘pretty-good-but-not-great’ category. The brightness of the images derived from a Blu-ray of Tintin is certainly welcome, and there’s quite an impressive depth of field, fighting against that ‘layered 2D’ effect manfully.

Detail levels are high, too, and the TX-L47WT50 does particularly striking work in extracting detail from low-light scenes.

But just like the cheaper Panasonic TX-L47ET50, there’s a slight restlessness to 3D images – a suggestion of motion-flicker that becomes a little wearing over time.

We’re on much surer ground with 2D content, and here the Panasonic turns in a performance that requires no excuses.

Blu-ray pictures from The Woman In The Fifth are beautifully lit, brilliantly poised and entirely believable. There’s great detail on offer, with skin-textures a real strong point, and contrast is bold and dynamic.

Motion, even the most testing slow-pan-with-rapid-onscreen-movement stuff, is handled confidently, and edges are drawn with a steady hand.

There’s simply no area in which the Panasonic isn’t authoritative, and in some cases (colour palette, fine detail retrieval and low-light insight especially) it’s as good as anything we've recently seen.

It’s a similar story with high-def TV. We prefer the images from the TX-L47WT50’s Freesat tuner over Freeview HD, but either way you’re well served.

Only combining rapid motion with complex patterns or big areas of uniform colour can provoke any uncertainty – in all other circumstances the Panasonic’s an effortlessly watchable TV.

But this is nevertheless a competent performer, more than able to hold its own with Panasonic’s Blu-ray players when it comes to upscaling.

It’s only where sound is concerned that the WT50 is underwhelming. It avoids overt hardness, but the sound is boneless and matter-of-fact with little dynamic range to speak of.In a home cinema system, though, the WT50 is a genuine contender.

The Panasonic TX-L47WT50 isn’t short of competition – but it’s got the looks and the picture quality to demand a place on your shortlist.