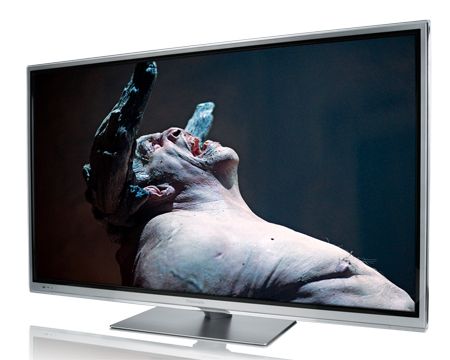 Not an unqualified success, but the ET50 gets plenty more right than it gets wrong

It’s the lack of 3D glasses that’s the only real giveaway. In every other respect, there’s nothing about the Panasonic TX-L47ET50 to suggest that it originates from towards the bottom of Panasonic’s 2012 TV range.

It’s a slim, well-finished device, and where specification is concerned there are few meaningful gaps.

It has built-in wi-fi in addition to a LAN input, so it can painlessly join to your network – and once integrated, it’s got a raft of on-line features (highlights include BBC iPlayer, Netflix, YouTube, a web browser and the usual social-networking sites, plus Skype with the addition of a camera) as well as DLNA compatibility. TV pictures are supplied by a Freeview HD tuner.

Panasonic is probably more feted for its plasma displays, but the LED-backlit LCD ET50 is no slouch. Ergonomically it’s among the most useable TVs we've tested: there’s a degree of adjustment available, certainly, but there’s none of the endless finessing of motion processing (for instance) that some rivals go in for.

And where the LED backlighting is concerned, it takes adjustment out of your hands altogether.

Set-up, then, is brief – and the results are generally impressive. Freeview HD images are bright and high-contrast, with a nice colour balance and a reasonable apparent depth of field.

Complex patterns can cause shimmering and noise, and standard-def broadcasts are notable only for their coarseness. It’s almost as if the Panasonic can’t quite bring itself to make anything but a sow’s ear out of inferior quality inputs.

Naturally, it’s a different story where Blu-ray is concerned. The Woman In Black looks lovely: strong contrast again, and the same expansive colour balance, but compared with HD broadcasts there’s additional insight, and a fine facility with skin-tones and -textures.

Motion is generally composed, but even fiddling with the five pre-sets can’t entirely rid the ET50 of some edge-crawl in more testing scenes.

Panasonic is quoting an 800Hz rate for its ‘backlight scanning’ technology (basically targeted and extremely rapid blinking of the LED backlights) but big numbers don’t automatically equate to flawless results.

Switch to some 3D content (we’ve yet to tire of Cave of Forgotten Dreams), strap on a pair of the (light, comfortable and cost-option) battery-powered 3D glasses and the ET50 continues to be a slightly qualified success.

There’s no denying the depth of field, and there’s very little loss of brightness – but while the Panasonic remains watchable even when on-screen movement is at its most testing, detail levels fall away a little and it’s never entirely free of a hint of flicker.

This is equally true of 3D gaming, where the ET50’s excellent response times and sometimes-spectacular depth is undermined somewhat by flicker.

The sound is thin and insubstantial – but at least there’s none of the sibilance that the Panasonic’s least-accomplished competitors insist on delivering.

As we’ve come to expect from Panasonic, this screen combines features and performance at a competitive price.

It’s not the last word in detail, and 3D is is better elsewhere, but as a package at this price, it’s a worthy contender.