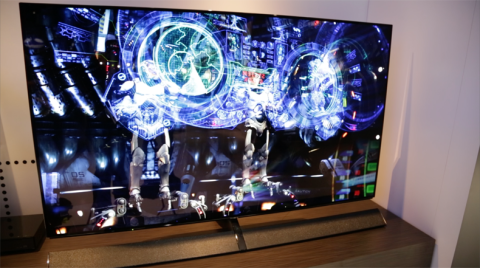 It’s obvious Panasonic is more than a little pleased with its TX-65EZ1002B TV – after all, it’s the only TV the company has announced at CES 2017 and it’s the only TV on display on its (colossal) stand in the Las Vegas Convention Centre. But, if you’re going to put all your money on ‘red’, as it were, make sure ‘red’ is packing 4K resolution, is HDR- (including Hybrid Log Gamma) compliant, features a stylish stand-cum-soundbar with audio input from Technics, and has a super-slim OLED panel.

The EZ1002 forms part of what Panasonic is calling its ‘Art & Interior’ concept. In practice, this means a frame with no visible seams and a fairly subtle dark metallic finish to all the main surfaces.

This concept also includes arguably the most eye-catching element of the TV's design, the ‘Dynamic Blade Speaker’ array underneath the TV. The speaker system integrates into the stand and is positioned in such a way that it appears to make minimal contact with the actual screen.

Panasonic’s new My Home Screen 2.0 smart TV system is designed to be the company’s smoothest and most intuitive user interface yet. It’s a ground-up reworking of the previous operating system, and features ‘favourites’ folders for multiple users (a ‘My Apps’ button on the handset gives speedy access to your favourite content) and a revamped Media Player app with support for HDR10 and Hybrid Log Gamma HDR content.

The UK gets the most up-to-the-minute version of Freeview Play with new search/recommendation tools and a ‘Quick Look’ guide which shows previous, live and future programmes for the channel currently being viewed.

Panasonic has pulled out all the stops as far as the EZ1002B’s picture performance is concerned. The panel itself – dubbed Master HDR OLED – has been measured by Panasonic to produce almost double the brightness of the company’s previous OLED offering, the TX-65CZ952B.

It can deliver the full DCI colour space that’s essential when dealing with HDR images (including the upcoming Hybrid Log Gamma variant), and is packing what Panasonic claims to be the most powerful picture processing technology ever integrated into a consumer TV.

In practice, though, it’s not the eye-popping brightness that really grabbed our attention. It can go piercingly bright, of course, if the images demand it – we saw an extended bright-white clip of a Pacific Rim scene that would have had a polar bear reaching for its sunglasses – but it’s the tremendous subtlety of the pictures that seems most impressive.

Rather than turn everything up to 11 and go for colour volumes that could strip paint, Panasonic’s engineers have instead used the EZ1002’s fearsome processing power to try and construct pictures that are as natural – in terms of colour gradation and contrast – as we've seen on a consumer TV.

In our brief time with the set, we were also impressed by the amount of detail the EZ1002 seemed to uncover in dark scenes – even in high-contrast scenes, black shading and detail levels didn't appear to suffer. It’s difficult to tell just how impressive a TV’s performance is until it’s safely set up at What Hi-Fi? Towers, of course, and it’s doubly difficult when the TV is part of a screamingly brightly lit stand at a packed trade show. But for now, we feel it's safe to say the TX-65EZ1002B looks a very decent TV.

First impressions of sound quality, on the other hand, will have to wait. Yes, the Panasonic’s tidy stand incorporates 14 speaker drivers and a passive radiator specified with input from Technics – but trying to judge its sound in the middle of a packed convention centre is like trying to judge a candle during a fireworks display. Though, it's comforting to know Panasonic wants its flagship 4K HDR OLED TV to have the sound quality to compliment its picture.

MORE: What is HDR? How can you get it?

OLED TVs are making all the headlines at CES 2017, and the Panasonic TX-65EZ1002B is no different. As you'd expect from a flagship 4K HDR television, it's crammed with all the latest picture processing tech, and our initial impression is that it should have no problems mixing it with rival OLED sets from LG and Sony. As soon as we've put a review sample through its paces, you'll be the first to know.