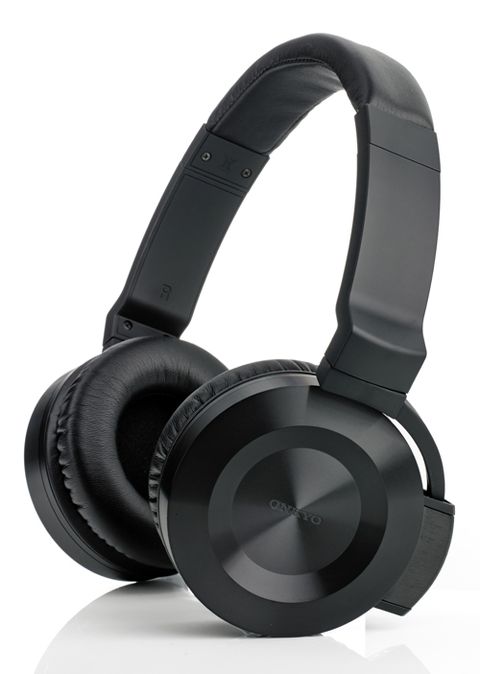 Easygoing and comfortable to listen to, Onkyo’s debut headphones are well worth an audition

Onkyo has a long history of producing great kit. So it’s something of a surprise that the Onkyo ES-HF300 cans are its first-ever pair of headphones. No pressure there, then…

Let’s get straight into it. We conducted two tests in one with these Onkyo headphones: an out-of-the-box assessment and a post-running-in assessment.

Our first impression was that these Onkyo headphones are definitely not short of bass: the sound is rich and deep, with decent punch – if not the most precise. And the crisp treble doesn’t jar either, even after only a few minutes of listening. Dynamics, meanwhile, are pretty good.

And after a weekend of running in, everything gels rather nicely, even if an edge of excitement has been sanded off the high-frequencies.

Boards of Canada’s Roygbiv sounds appropriately analogue through the ES-HF300s. It’s a nice, rounded, fluid performance that really does put you in mind of all those hazy summer afternoons when you were a kid. But there’s a slightly lazy quality to the low frequencies that slows things down just a little too much for us to ignore.

Cohesion across the frequency range is good (that’s partly down to the single-driver design), but we can’t help wishing for a little more space between the bass and low-midrange. They step on each others’ toes at times, which is a shame because this draws attention away from that precise, detailed treble.

We have a sudden desire to listen to some flamenco guitar – but only if it’s being played by a Dutch guy in a California recording studio. Luckily, Eddie Van Halen obliged in 1979. Spanish Fly is a great test of detail and dynamics with its close-miked nylon-string performance.

The HF300 headphones do a nice job conveying the intimacy of the piece, with pick attacks and hand movements ringing out clearly. Get to the 18-second mark and a hair-raisingly rapid-fire ascending run up the fretboard, and each mini-crescendo is handled with style. You really anticipate each staccato attack.

It’s all very well listening to hi-fi-friendly tracks with pristine vocals and sparse instrumentals. They’ll always show off kit to its best if it’s up to the job. But a load of heavy metal can really sort the men from the boys: it’s time for Metallica to step up.

Holier Than Thou can easily be a claustrophobic experience. Twin guitars delivering monolithic slabs of riffage, a huge drum-sound and attitude-laden bass parts aren’t the easiest things to reproduce. The Onkyo headphones do a good job, though, giving everything plenty of room to breathe. In fact, we noticed a little guitar-talkbox part that had eluded us for the best part of 20 years. Nice.

But as the volume increases, the bass can get a bit too hefty. It starts to overwhelm the treble – which, by contrast, stays well behaved at all but the most eye-watering levels.

We really like the design consistency between Onkyo’s AV kit (see the the Onkyo TX-NR3010 amp below) and the HF300s.

The aluminium ear-cups echo the design of the company’s amp controls, and the all-black look is suitably serious-looking. It’s a nice touch. They’re the sort of thing you could wear outside, too – no Cyberman look-alikes here.

Inside the cups sit 40mm wide-range titanium drivers. Behind these are sub-chambers that Onkyo says optimise the bass response.

We like the Onkyo headphones' light-but-not-too-light weight, too: ‘flimsy’ isn’t a word you’d even dream of using to describe them. They’re well built and don’t weigh your head down, nor do they make you feel like you’re being squeezed in a vice. (Not that they’re loose, either – as our earlier Metallica session proved.)

The earcups have a swivelling design. They’ll sit flat in a bag, but that’s the limit of their foldage. The included carry-pouch should help keep them safe, though.

The cable is what distinguishes the ES-HF300s from the £150 ES-FC300s. The HF300s have a higher-grade copper cord protected by transparent plastic that the company claims transmits less physical cable noise. See our news story for all the details on the Onkyo headphone range.

The wires are interchangeable, too – so if you’ve a pair of Onkyo earphones, this cable will fit them as well. And we think it’s a statement of intent that there’s no inline mic or remote control on board (although there’s no 6.3mm adaptor for home hi-fi use).

The only thing holding these Onkyo headphones back from a five-star full-house is that slightly louche quality to the bass.

But they’re still a really pleasant listen – and a great debut for Onkyo in the headphone market. They’re laid back and amiable, not to mention comfortable to wear for long sessions. We urge you to try them.