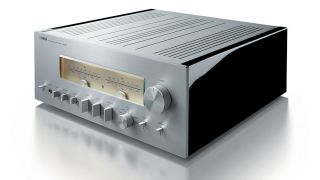 Yamaha has released the A-S3200, the first and most powerful amplifier in its newest series of pure analogue stereo amplifiers. It features many of the same technologies used in Yamaha’s flagship 5000 Series amplifiers and although the new amplifiers look similar to the A-S1100, A-S2100 and A-S3000 models they replace, Yamaha says these latest models use new technology and components.

“The new A-S3200 incorporates key features from the 5000 Series, including mechanical grounding to reduce unwanted vibration, thick wires for ground connection to ensure lower impedance and the toroidal transformer uses drawn-out wiring to reduce energy loss,” said Simon Goldsworthy, General Manager of Yamaha Music Australia’s AV Division. “The A-S3200’s circuitry has been re-invented and is the result of years of customer feedback, research and development".

It turns out that power output meters have been a hit with Yamaha’s customers, so they’re a feature on the A-S3200 and also on the soon-to-be-released A-S1200 and A-S2200. Unlike most power meters, the ones on the new models can be switched to show Peak, VU or Average power output readings. Yamaha has also by popular demand retained bass and treble tone controls on the new models, and implemented them via its unique bar-shaped controls, rather than the more usual rotary types.

Rated with a power output of 100-watts per channel into 8 ohms (150-watts per channel into 4 ohms), the Yamaha A-S3200’s power supply combines a 623VA toroidal transformer with 22,000uF/63V block capacitors. Thanks to its fully-balanced, fully-floating design circuit design, Yamaha says the A-S3200’s damping factor is greater than 250 at 1kHz, and its frequency response extends from 5Hz to 100kHz (-3dB). THD is specified at less than 0.05% and signal-to-noise ratio at 114dB.

The Yamaha A-S3200 is full-featured, with seven line-level inputs, two of which are balanced, and a separate phono input that can be switched for either moving-magnet or moving-coil operation. It also has a discrete headphone amplifier with a useful volume trim function.

In keeping with Yamaha’s ‘pure analogue’ concept for its stereo amplifiers, there is no digital circuitry inside and no digital inputs. “Music lovers deserve a rewarding and authentic reproduction of their favourite tunes,” said Goldworthy, “and Yamaha’s concept is to deliver the most accurate and dynamic expression of ‘True Sound’, which is based on the ideal that the sound of voices and of musical instruments should always be produced in the most natural and lifelike way".