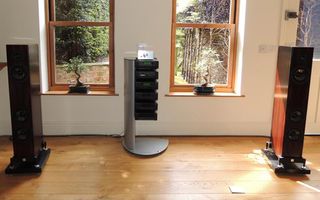 It's now time for us to reveal the #WHFsystems 'System of the Month' for May, as voted for by you...

We asked you to choose from one of the 10 most popular readers' systems, as shared on the What Hi-Fi? Twitter and Facebook pages using the #WHFsystems hashtag.

There's a prize for the system that chalked up the most votes, and for a lucky voter too. It was a close vote so, without further ado...

Winning system: Joe from York, via Twitter (see above)

The owner of the winning system gets a pair of NAD Viso HP-20 headphones worth £120, while our lucky voter gets an Acoustiphase MC-1 Bluetooth speaker.

We got in touch with Joe to find out a little bit more about his winning system.

Talk us through your system...

"I also have a Burson Soloist SL headphone amp which I use to drive my Audeze LCD-2 and Hifiman HE-500 planar magnetic headphones."

How have you built your system?

"I’ve been a Cyrus user for a few years now but my system has really grown in the last 18 months or so thanks to some fantastic sounding upgrades which started with the Stream XP2.

"Streaming music has been a game changer for me and I enjoy the crisp and detailed yet musical sound Cyrus offers, particularly with the VA speakers which are a fantastic match."

"I’m currently saving up for a turntable as I’d like to dabble with vinyl as well.

"Although I love streaming my music, I also like the idea of collecting something physical and enjoying the different sound analogue brings to a system. Unfortunately that’ll mean losing that neat Hark 2 rack!"

You can remind yourself of all the #WHFsystems we've seen so far by visiting:

Of course, you can also search using the #WHFsystems hashtag on Twitter and Facebook – and don't forget to continue sending in pics of your setup on social media using the hashtag...