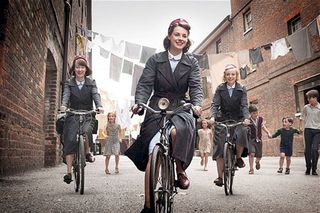 Hello everyone, welcome to our guide of the best HD/3D TV shows, films, sports and Blu-ray to watch out for this week. A few exciting things happening this week: the hotly anticipated MasterChef final, the inaugural Formula 1 race as BBC and Sky battle it out to bring the best coverage between them, and oh look, the sun has decided to come out of hiding.

Here's what we found to be interesting this week:

The first series of the critically acclaimed BBC period drama is based on the memoirs of Jennifer Worth and is set in East London in the 1950s. The six episodes follow the experiences of newly-qualified midwife Jenny Lee and the work of midwives and nuns at Nonnatus House. Jessica Raine and Miranda Hart lead a stellar cast with voiceover from Vanessa Redgrave, and this Sunday night series marks the highest viewing figures of any original British drama series in recent years.

Set two and a half years after the events of This is England '86, Shane Meadows and Jack Thorne bring back Vicky McClure, Joe Gilgun and the rest of the gang for Christmas in 1988.

Apparently James Martin is a huge car fan, and shows his love for racing by competing in the gruelling Mille Miglia, a 1000-mile car race through Italy for 3 days, with over 300 classic cars taking part. Martin's choice of car is a 1948 Maserati.

If you're experiencing a Sherlock-sized hole in your weekly TV detective dose, you might want to tune into Dirk Gently. Adapted from the Douglas Adams books, Dirk Gently is a holistic detective who believes in the fundamental interconnectedness of all things and applies this approach to connect and solve the seemingly random cases that stumble into his path. Stephen Mangan plays the frustratingly quirky detective, with Darren Boyd delivering deadpan humour as his reluctant sidekick.

Historian Dr Helen Castor explores seven queens across medieval and Tudor English history who have challenged male power. The first episode looks at Matilda, who nearly became the first queen of England 800 years ago, and her daughter-in-law Eleanor of Aquitaine. We'll hopefully also find out why they're called 'she wolves'.

It's the start of the final week on what's been one of the best series of MasterChef. John Torode and Gregg Wallace send the remaining cooks to test their skills at three of the finest three Michelin star restaurants in Europe.

The penultimate episode of the series turns up the heat as the finalists face their most terrifying challenge - The Chef's Table. Cue eye-popping expressions from Wallace and Torode.

Bafta-winning documentary charting the life of one of the finest drivers in Formula 1 history, Ayrton Senna. Even if you're not an F1 fan, this documentary is captivating and emotional, and was made with great love, care and respect for this legendary racer. With plenty of insights from his family and fellow drivers, it portrays Senna's epic rivalry with Alain Prost right to his tragic death at Imola in 1994.

This is it, this is the big one. Clear your schedules and workstations – TV doesn't get any tougher than this. The best three cooks are left standing for one last showdown, before being crowned MasterChef Champion 2012. Exciting stuff.

I love it when Rich Hall turns up on QI - his laconic and acerbic wit is both refreshingly intelligent and hilarious, and his musician alter-ego Otis Lee Crenshaw makes an appearance to the sell out crowd at the Apollo.

Hurtling around the sun at 64,000 miles/hour and travelling 584 millions miles, our Earth must be having one hell of an exciting voyage around the Sun. In this episode, Kate Humble and Dr Helen Czerski travel from July to the December solstice, experiencing spectacular weather and the largest tides on Earth.

Georgie Thompson and Ted Kravitz start off Sky's coverage of this year's Formula 1 with the latest news ahead of the first race this weekend in Australia.

Live coverage on Sky Sports F1 HD at 5am

Highlights on BBC HD at 1pm

Live coverage from Sky Sports F1 HD at 4.30am

Highlights on BBC HD at 11pm

Everyone's probably expecting Sebastian Vettel to yet again win the first race at Melbourne, but wouldn't it be hilarious if returning champ Kimi Raikkonen won it? Ah, I can hope.

Zombie-fightin heronine Alice still roams the post-apocalyptic wasteland searching for survivors. Old friends, a rumoured LA sanctuary, the inevitable deadly trap, and lots of zombie death action. While none of the sequels have been as cool and succint as the first film, the 4th in the franchise is also the first to be in 3D. With Milla Jovovich, Ali Larter and Wentworth Miller.