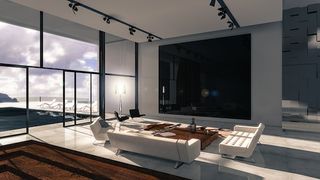 British screen manufacturer Titan has unveiled the Zeus TV, one of the largest and most expensive TVs available to buy. It measures a hefty 370 inches – almost the size of a football goal – and costs a cool £1million.

For such a large sum, you'd expect the Zeus to support 4K technology, and thankfully, Titan has delivered. The Zeus has 65 billion colours and weighs in at nearly a tonne.

Titan says only four Zeus screens will be made, with two having already been pre-sold: one to a British media millionaire, and the other to be built on top of a hotel in Cannes.

For an extra fee, Titan will install your TV and deliver it in a custom built Hummer.

Titan CEO, Anthony Ganjou, said: "We have assembled the best screen technologists in the country to hand build a British-made screen which would not only be the biggest but the most the extraordinary ever conceived."

"Following the interest in the launch of our ultra high-end 173 inch domestic screens, we decided to create something iconic and the team spent six months building the million pound screen."