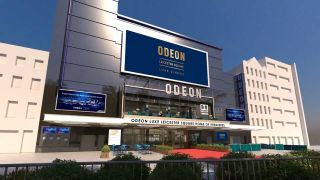 Six months after the ribbon-cutting opening of the first Dolby Cinema in the UK, and following the April launch of the second (the Odeon Luxe Leeds Thorpe Park), Dolby and Odeon have today confirmed the opening of two more Dolby Cinema screens in the UK this year.

In the autumn, the Odeon Manchester Trafford Centre and Odeon Luxe Birmingham Broadway Plaza will become the third and fourth cinemas in England to offer both Dolby Atmos surround sound and 4K Dolby Vision HDR projection. Just in time for the October release of Joker, perhaps?

The new sites will screen new releases produced in Atmos and Vision. The Manchester Dolby Cinema will feature 160 reclining seats, while the transformation of the largest auditorium in the Birmingham theatre will see it kitted out with 235 reclining seats.

Julian Stanford, senior director of Dolby Cinema Europe said: “With moviegoers in London and Leeds already experiencing films in a spectacular Dolby Cinema, it’s now time for those in Manchester and Birmingham to get a taste of the magic.”

Having committed to opening seven Dolby Cinema screens in the UK, the partnership should be opening at least another three in the near future. With the North, Midlands and South East covered, we may reasonably expect screens to pop up in the South West, Wales or Scotland.

There are currently around 400 Dolby Cinemas in the world, and over 235 Atmos and Vision titles have been, or are scheduled to be, released. 2019 highlights have thus far included Alita: Battle Angel, Avengers: Endgame and Rocketman, while the likes of Toy Story 4, Lion King, Joker and Star Wars: The Rise of Skywalker are all to come.