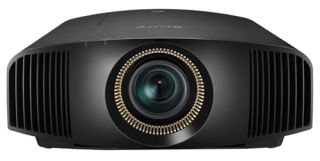 The Sony VPL-VW500ES brings the 4K big-screen home cinema experience to a slightly more affordable price, coming with a price tag of £8,500.

Other proprietary Sony picture technologies are on board, from Triluminos display to Motionflow processing, while the 4K projector claims a 1,700 ANSI lumens brightness and 200,000:1 contrast ratio, for all you number-crunchers.

Reality Creation promises to get the best out of HD and 3D content – yep, it's a 3D projector, too – while Sony claims there's also an upscaling alogorithm to get the most out of its Mastered in 4K Blu-ray discs.

If you're not ready to leap aboard the 4K TV bandwagon quite yet then the Sony VPL-HW55ES could be for you. A full HD 3D projector, priced at £2,750.

Sony Bright Cinema, Bright TV and Reality Creation are also packed inside to get the best out of any room or content.

Tak Nakane, product manager at Sony Europe said: "The VPL-VW500ES brings the cinema experience into the home like never before and reinforces Sony’s commitment to lead in 4K innovation from lens to living room.

"Innovations such as Sony’s 4K SXRD panels provide unrivalled picture quality at high resolution to make the 4K dream a more affordable reality. The addition of the VPL-HW55ES provides a premium 3D home cinema experience and expands the product range from which our customers can choose."