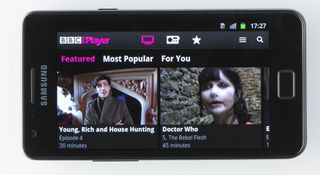 Samsung's latest innovation is a 'smart app' that enables users to share content between a Samsung Smart TV and mobile devices.

Initially available for the Galaxy S II smartphone (above), and in due course on other Samsung Galaxy devices including tablets, the free app streams content from a Samsung Smart TV (or connected Blu-ray player) via a home wi-fi network on your portable.

So you can watch your favourite TV shows and films anywhere in the home on your Galaxy S II smartphone, Galaxy S Player or Galaxy Tab (below).

Samsung says it will continue to update the Smart View app with functions such as remote control functionality and a channel list option, which will let users search programme information and change channels from their mobile devices.

The Samsung Smart View app is available now from the Android Market for the Galaxy S II smartphone and works with the new Samsung D7000 and D8000 series TVs.

The app will become available for the Galaxy S Player in July, and the Galaxy S and Galaxy Tab will get it later this year.

• We'll have a full test of the new Galaxy S II smartphone in the August 2011 issue of What Hi-Fi? Sound and Vision, on sale from June 30th.