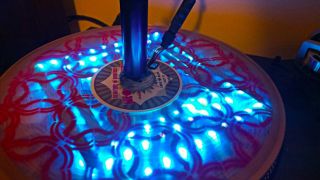 US record label Romanus Records has lived up to its commitment to release unique forms of vinyl, with the likes of tri-colour, glow-in-the-dark, and sand-, glitter- and beeswax-filled vinyl pressings.

"I had nearly given up, and while being on the road with Brother O’ Brother I finally came to the conclusion that I had to cut a hole in the record. I mount a 45 adapter to an Ion Power Pack vertically, which keeps the cables from resting or being in the way of the tone arm.”

The limited run of only 45 was snapped up quickly when it went on sale yesterday. But do not fear, the product description of the Brothers O’ Brother’s album reads: ‘If this goes well we will have some King Gizzard LED records shortly.’

In the meantime, it’s probably one to add to our history of the weirdest vinyl records every made…

15 celebrities and their record collections

Paying the ultimate tribute in song

15 songs that sound best on vinyl