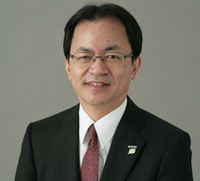 Yoshiyuki Miyabe (left), Panasonic's Chief Technology Officer and in charge of its TV and digital products activities, said yesterday that it seeks to have the TVs on sale 'by fiscal 2015'.

However, he hasn't given specific information concerning the panels, which the company is co-developing with Sony, saying that 'we are only at the technological development stage at this point.'

Panasonic is also carrying out a significant scaling-back of its output of LCD and plasma screens for TV use, to the point where LCDs for tablets and other non-TV applications will account for 80% of its product by the end of this year. Currently the TV/non-TV split is around 50:50.

Small-screen displays are much more profitable than TV panels, a factor behind the switch to portable displays by companies such as Sharp, and the founding of Japan Display by Sony, Hitachi and Toshiba, merging their smaller-screen LCD business units to exploit this fast-growing market.

However, Miyabe denied suggestions that Panasonic is looking for a way out of the LCD TV panel business altogether, and wouldn't be drawn by questions regarding the company's much-discussed considerations about the future of its plasma TV manufacturing. The company is widely thought to be contemplating exiting the plasma TV panel business, but Miyabe would only say that it has 'several options'.

OPINION: If Panasonic is looking to OLED/OEL panels as the future of its TV business, that's going to be seen by many as a very brave move indeed. Even with the co-operation of Sony in commercialising the technology, the fact remains that, to date, TV-sized OEL/OLED panels have proved frustratingly tricky to mass-produce, with very high rejection-rates and thus low yields.

That's very long way from the tried and tested LCD manufacturing processes, able to churn out huge numbers of panels quickly and reliably.

Those problems have been one reason the technology has been so slow to move on from the early small-screen models marketed by a couple of companies some years ago, and is likely to remain a premium-priced product for the foreseeable future.

As far back as 2009, when Sony's 11in XEL-1 OLED TV (right) was already on sale, there were suggestions from some quarters that 'this is going to be OLED's year' – but to date progress has been slow.

The South Korean rivals have made moves toward getting OEL TVs into the shops, but prices are currently way beyond those of even the most premium plasma equivalents, and many times the tickets on current high-quality LED-lit LCD TVs, which continue to improve in picture quality, slimness and value for money.

Sony showed a 56in 4K OLED prototype (below) at CES at the beginning of this year, as did Panasonic, but readily-available consumer models from the Japanese companies, formerly the leaders of the global TV industry, still seem some way off.

A major part of the Sony/Panasonic research concerns turning an attractive concept – OLED/OEL panels can be made super thin, as they are self-illuminating and thus don't need the backlights used in LCD TVs, and are light, energy-efficient and capable of very high picture quality – into a commercial reality, at a price attractive to consumers.

If that can be achieved, OEL could be the product TV manufacturers, currently struggling to make a profit, could be looking for: a technology cost-effective to manufacture, yet with a form-factor and picture-quality able to tempt customers to pay premium prices in a market dominated by savage price-cuttings.

It's likely to be a long haul for the Panasonic/Sony alliance, but if the plan pays off it could be the salvation of both companies' home audio/video operations.