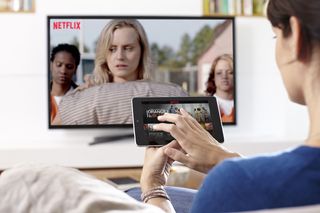 In fact, the company said that it had seen an increase in the number of Smart TVs used to access the service from Latin America, while reporting growth in the number of net additions in Brazil as the World Cup was under way.

Netflix subscription numbers have now grown to more than 50 million worldwide, significantly boosting the company's performance during Q2 2014; profits were more than double the $29m (£17m) posted in the same quarter last year.

Content including the second series of Orange is the New Black also strengthened Netflix in Q2 – now the most watched series in "every Netflix territory". Other titles, such as Derek and Hemlock Grove, were also strong performers.

And there's also the Ultra HD 4K streaming service offered by Netflix, with the library expanded with the complete Breaking Bad in June. Netflix says we can expect the 4K offering to "grow steadily" with more titles to be added in due course.

Joshua Raymond, chief market strategist at cityindex.co.uk, said: "The rise in profits comes broadly in line with most market expectations but what’s perhaps the most pleasing is the loyalty of Netflix’s subscriber base.

"Undoubtedly the timing of the second season for the Emmy-nominated series Orange is the New Black, which came out in Netflix’s second quarter, has helped maintain subscriber loyalty here, as well as the popularity of established favourites such as House of Cards."