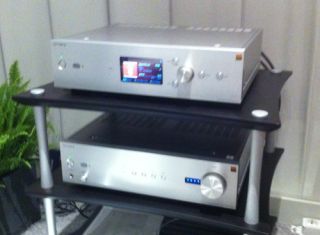 One of the biggest surprises to come out of IFA 2013 was the unexpected announcement from Sony that it had developed a whole range of high-resolution audio products. In the flurry of press conferences on the first day of the show, the announcement was quietly slipped out and almost passed us by.

Fortunately we bumped into Sony UK's technical guru Eric Kingdon on the Sony stand and he took us into his 'high performance audio' demo room where the new products were revealed (apologies for the slightly blurry picture below, but I only had my iPhone with me at the time).

You can read all about them in our news story, but just to recap there's a whole range of High Resolution audio products, including the flagship HAP-Z1ES HDD audio player and matching TA-A1ES integrated stereo amplifier (above, £2000 each), plus the one-box HAP-S1 HDD audio player system (£800), the £500 Sony UDA-1 USB DAC and headphone amp and two sets of new stereo speakers.

Following in the footsteps of the LG G2 phone, which became the first smartphone to support hi-res audio when it was announced last month (and now the Samsung Galaxy Note 3), the new Sony Walkman delivers hi-res audio for "six times more audio information that on a standard CD".

There's even a new HD music download store that will also allow customers to browse a "growing range of High Resolution recordings" and click through to buy and download. You can take a look at the Sony High resolution audio hub online now.

Clearly, this is all part of a concerted plan. Sony, as the co-developer of the CD and SACD, says it has drawn on its rich audio heritage to deliver a range of hi-fi products that express "The Power of Premium Sound".

Intrigued to find out more, I caught up with John Anderson, Head of Home Entertainment for Sony Europe, and Gildas Pelliet, Sony's European Head of Marketing, in Berlin.

So what had prompted this move to develop a whole series of hi-res audio products? "With audio it's become convenient to do everything over the web, but in the process something has been lost with compressed music," says Anderson.

Given the company's experience with Super Audio CD, the move to hi-res rips and downloads is a logical one. But where does that leave SACD?

Eric Kingdon, who helped develop the new products, chips in: "SACD has grown gently as an audiophile product, and I don't think there's a problem with that. DSD [Direct Stream Digital, the technology behind SACD] has already proved its merit with DSD downloads, and the fact is high-resolution music can be downloaded, stored on an optical disc or on a computer hard drive – whichever you prefer."

Sony doesn't see hi-res audio as a narrow, niche market. In Anderson's view, some of the firm's customers already want it, while others will have to be educated about the benefits of better-than-MP3 audio.

What's telling, however, is that the line-up announced at IFA doesn't just consist of high-end separates components: there's that all-in-one system (below), the USB DAC (already a booming market), and the F886 Walkman. There'll be headphones tuned for hi-res audio as well. And with rumours that HD Tracks, the hi-res download site, may soon be coming to the UK, Sony's timing could be spot-on.

Talking to Anderson and Pelliet it becomes clear that the move into hi-res audio is part of a bigger plan. ""We want to deliver the best audio and video experience we can," says Anderson."Certainly there's a renewed focus on audio, and we still believe there's a market for audio separates."

That's good to hear, as there's been a lot of talk coming out of Tokyo about Sony rationalising its product line-up and concentrating on three key areas: TV, gaming and mobile. Anderson is at pains to point out that Sony remains committed to the separates audio and video market, although it will have a more "focused" range of products.

Switching to home cinema, the other part of Sony's plan to deliver "the best audio and video experience" is of course 4K TV. You couldn't move at IFA without bumping into new 4K sets from the likes of Panasonic, Philips, Samsung, LG and Toshiba. Sony is no exception, and 4K is at the heart of its TV strategy.

Anderson admits that the flatscreen TV market is down overall year-on-year, but points out that there is strong sales growth (40%) in the 46in sector, and even more so (60%) for screens of 50in and above. "There's a clear shift towards larger screen sizes and that's where 4K can offer a better picture and added value. In Europe our focus is very much on 4K and picture quality."

On the subject of the relative lack of 4K content, Sony admits the market is in a "period of transition" but says it is better placed than most to capitalise on that, owning as it does Sony Pictures and having recently carried out a trial of 4K transmissions at Wimbledon with the BBC.

MORE: Everything you need to know about 4K TV

It has already launched its 4K FMP-X1 Media Player and Video Unlimited 4K download service with is Ultra HD TVs in the US, but to the chagrin of UK customers the Media Player is not available in this country. All Anderson will say on the subject is that Sony "is looking at introducing it in other markets, but there are no plans 'yet' to bring it to the UK and Europe".

The conversation turns to OLED and curved TV screens, again much in evidence at IFA 2013. The manufacturing problems posed by OLED screens, which tend to suffer from a high reject rate, are well documented elsewhere. When I ask about this, Sony says it is "still working on developing OLED sets, but we have no time frame yet for a consumer release".

As for curved TV screens, Sony is using IFA to showcase what it claims is the world's first curved LED TV (above) and "gauge reaction to the product in Europe. We see a market for it in Russia and the US, but we have no European launch plans yet." That word 'yet' again. If the demand is there, I suspect Sony will take the plunge.

With all this talk of 4K and downloading, what about Blu-ray? It hasn't taken off as quickly as DVD did before it, so will BD be the last disc-based format for movies?

"Blu-ray disc penetration is still increasing," says Anderson. "It currently stands at around 26% of UK households, and that's without including PS3. Some people still prefer to own their films on a physical disc, and as regards streaming, we still need a better broadband infrastructure. Plus you can't always get what you want on the streaming services."

What's clear from all of this is that Sony, despite the major restructuring the business has been through in the last couple of years to regain its profitability, is not standing still. High-resolution audio and video is now at the core of its home entertainment strategy, and that can only be good news. Exciting times.