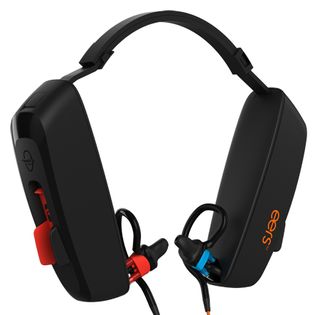 The media scrum is underway and after queuing for an hour, we finally made it into the CES Unveiled showcase.

So what did we see? Well first up is Pure's new £200 AirPlay-enabled Contour 200Di Air iPad/iPhone dock and revamped Sensia DAB/internet radio – you can read about both in our extended news story.

Next were the rather nifty eers custom-fit in-ear headphones from Sonomax. There's nothing new about custom-fit headphones of course – Etymotic have been making them for a while – but the difference here is that the eers come with a home fitting kit (pictured below).

The system injects silicon rubber into your ears to make a perfect fit for the earpieces, and all you have to do is wait for 4-5 mins until the mould is dry and then attach it to the connector on the headphones themselves.

Then you'll have a pair of headphones that perfectly fit your ear canal.

The PCS-150 (left) has a single speaker in each earpiece, while the PCS-250 uses two dual-driver speakers acting as a separate tweeter and woofer for improved sound reproduction.

Sonomax tells us they hope to bring both models to the UK in March/April this year, UK pricing to be confirmed.

ActionTec was showing off its MyWirelessTV, a compact video kit that wirelessly transmits high-definition TV throughout your home.

Each kit comes with a transmitter and receiver: all you do is connect the transmitter to any set-top box, console or Blu-ray player, and connect the receiver to the TV you want to transmit to. You can then distribute 1080p video over wi-fi up to 150 feet away.

In a similar vein, RCA had its dinky little wi-fi media streamer on display, designed for streaming the likes of Netflix and Pandora to your telly in up to 1080p resolution.

Behringer made a splash with its latest range of iPad and iPhone docks, including the waterproof and wireless Splash 100 with 'mood lighting (the one that looks like a football in the photo below), and bizzarely named BoomPow 200 dock (below left) including an FM radio and video out for connecting to your TV.

Mind you, we still haven't seen the gigantic, 8ft wide Behringer iNuke Boom with 10,000W power output that we wrote about earlier! We'll be keeping an eye out for that one.

Now this also caught our eye: the Ion Guitar Apprentice controller, which transforms your iPod into a guitar. Using the Guitar Apprentice app, you can follow the light's on the device's neck to help you learn to play.

We'll have more on that in a separate story soon.

House of Marley had its full range of headphones and wooden boomboxes on display – you can read our verdict on the company's Freedom: Stir It Up headphones in the February 2012 issue of the magazine, on sale from Wednesday, January 11th.

And finally (for now), Griffin unveiled this natty device which enables any speakers you own to be integrated with an AirPlay wireless system. It includes a 2.1 amplifier combined with an Airport Express, and you can read more about it in our separate news story.

This, of course, is just the start of the week-long techfest that is CES 2012. We'll have plenty more stories for you later today when the official LG, Sony, Samsung and Panasonic press conferences begin.

And don't forget you can discover more of the innovative products at CES in our dedicated blog.