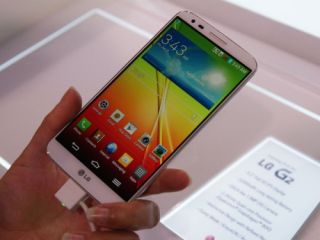 LG is desperate to join the top table when it comes to mobile phones, and the company's latest flagship smartphone, the G2, is the next throw of the dice.

Launched to predictable fanfare in New York, the same treatment as the Samsung Galaxy S4, the LG G2 Android phone looks impressive on paper and comes with some innovative and unique features.

It's the first smartphone to support hi-res 24-bit/192kHz audio, while the G2 also opts to place the only buttons on the back of the device - but will the complete package be good enough to take on the best smartphones in 2013?

Inside there's a 2.26GHz quad core SnapDragon 800 processor and 2GB RAM, which puts it straight to the top of the best spec pile alongside the incoming Sony Xperia Z Ultra.

There look likely to be 16 and 32GB internal memory options, though whether there will be an SD card slot seems to still be up for debate - it seems there may be one in some models in certain territories. A 3000mAh battery is a decent size but the LG G2 will need it to power that hefty screen.

A 5.2in screen might sound big but we haven't quite got into phablet territory here – the G2 feels (and looks) almost identical in the hand to the Samsung Galaxy S4 (though a little blockier and wider), despite that extra fraction of an inch.

LG knows how to build a good-looking phone, having delivering the stylish Nexus 4 for Google, and the G2 certainly looks smart with a very slim bezel and no buttons breaking the front fascia or side of the device. Why? All the buttons are on the back, with a power/display button and the volume controls tucked beneath the rear camera lens.

The theory is that's where your fingers naturally fall, but if you're afflicted with tiny fingers, this placement may not be so clever. The G2 is a big 'un, so you might struggle to access the buttons one-handed. Which sort of defeats the object. Longer-term testing in our full review will get to the bottom of this one.

Available in white and black, the handset feels sturdy, but as with the S4, it doesn't feel as wonderfully weighty and solid as the HTC One. We're not sure the design reflects the (presumably) flagship price and spec.

The G2's 5.2in screen looks just as eye-poppingly impressive in the flesh as the displays on Android rivals such as the Galaxy S4 and HTC One (shown below).

It's also easy to see that there's bags more screen real estate in essentially the same sized handset, thanks to the super-slim bezel. Whether it can match or indeed better the class-leading phones for video performance remains to be seen.

First impressions reveal superb viewing angles, as is to be expected from an IPS display, and the G2 also looks impressively bright and colourful using the stock videos loaded on the phone.

We didn't get to dash outside in to the New York sunlight with the phone, but we'd expect it to perform pretty well outdoors.

A big screen and high screen resolution give us plenty of reason to think HD video should look pretty good. It's worth pointing out that while it may not have made many headlines we were pretty impressed with video from the previous top-dog, the LG Optimus 4X HD.

LG claims it had to get its hands dirty with the Android 4.2 OS to support 24-bit/192kHz files (FLAC and WAV), so we hope it's been worth it. Of course that 32GB hard disk will fill up pretty quickly but we applaud the effort to raise interest in delivering better smartphone sound quality.

There will also be LG QuadBeat headphones available in some markets, which claim better performance than the average freebie earphones. We didn't get a chance to listen to music properly on the G2 so we'll reserve judgement on whether it can beat the class-leading iPhone 5 for sound quality until we get a full review unit

LG's loaded a lot of in-built apps, tweaks to Android 4.2.2 and features to the G2 – so much so that on the 16GB model we played with only 10GB was available.

LG, not unlike Samsung, does tend to suffer from filling its phones with bloatware and generally making for a noisy often confusing screen experience, so we're wary of how the final G2 may look in this respect. Hopefully some of the screen stutters we saw will be ironed out by the time it's released.

There are always 'new' features, some more gimmicky than others, KnockOn seems to be one of the better ones: double tap the screen to unlock the screen and double tap anywhere else on the screen to turn the display off.

Elsewhere, performance in our test LG G2 was solid – as you'd expect with a 2.26GHz Snapdragon 800 processor and 2GB of RAM under the hood.

In our short play with the G2's 13MP rear facing camera, we were impressed. Images look sharp and vivid on screen, the 8x zoom for stills and video seems genuinely useful, and the optical image stabilisation appeared to work a treat.

There are a wealth of modes, settings and filters to play with, which should keep camera geeks amused, including a clever 'Audio Zooming' mode that allows you to pick out and highlight audio within a video, as show nicely in this LG G2 video.

On paper the LG G2 looks impressive, but it's fair to say LG has mixed smartphone pedigree. It's good to see a manufacturer thinking outside of the box, though, and we're intrigued to see how the buttons-on-the-back design works in every day use.

But for music and movies, it looks promising. Hi-res audio support is a massive tick on the spec sheet in our eyes (and ears), while the big screen packs plenty of pixels inside a slim bezel, which is always a good combination.

Could this be the ultimate mobile phone for serious music and movie enthusiasts? LG certainly hopes so. We will have to wait until we can review the finished LG G2 phone to find out...